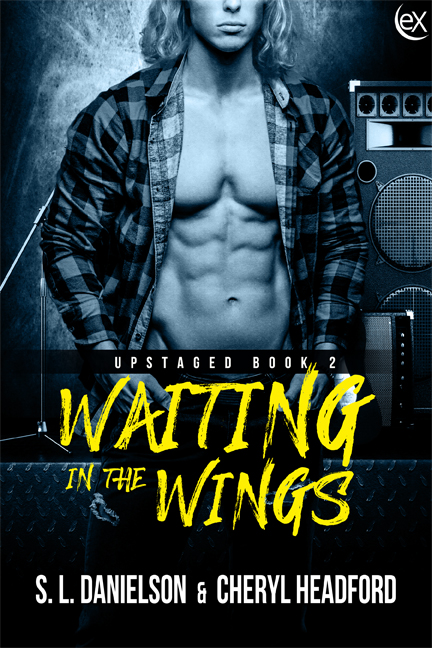 Title: Waiting In the Wings

The Von are on their way.  With a recording contract under their belt and a tour opening for a popular band, the world is at their feet.  For those left behind prospects are not so bright, especially with someone trying so hard to break them apart.

With the spotlight on The Von, no one sees the evil waiting in the wings until it’s too late. 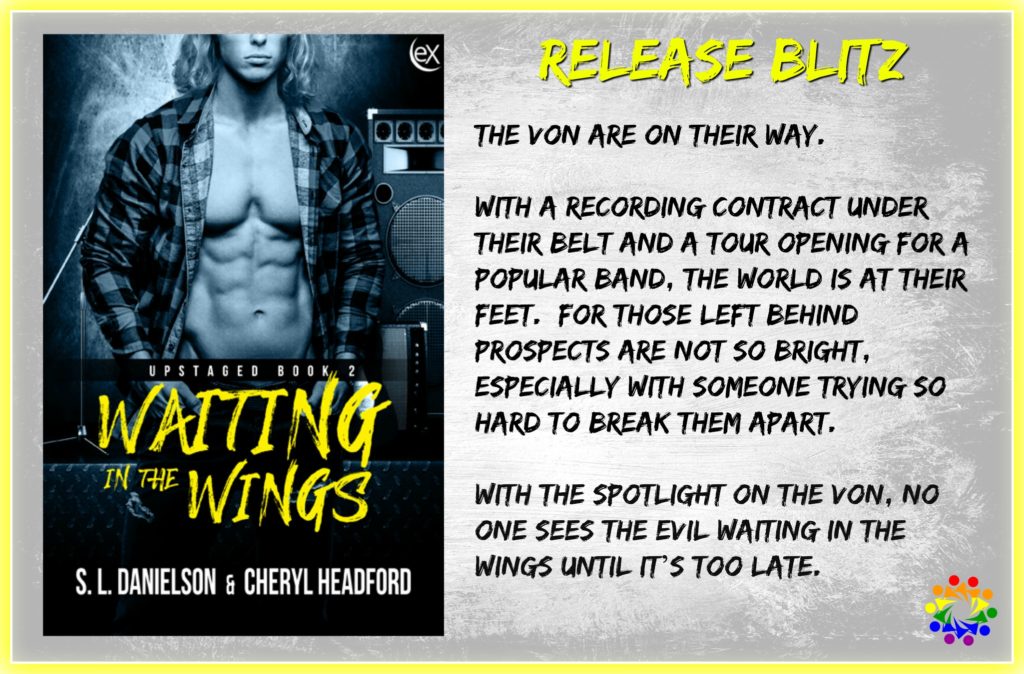 After a long moment of waiting for Asher to return, Vince heard the door open, albeit slowly. He put down his glass of orange juice and peered suspiciously at his friend. “Hey, what is it? Bad news in the mail, also known as bills?” he joked. Asher didn’t say anything, which worried him. He stood and walked over to him to look at what he had in his hands.

“Let me see them, please?” He wrested the slips of paper free from Asher’s grip long enough to see the photos and got the shock of his life. Glossy, set in some cool, trendy club surrounded by gorgeous people, Erik kissed a total stranger like he might inhale the guy and Billy was kissing a redheaded guy who looked very familiar.

What the… No. Not again. Wait. I know that guy… Holy shit, I know him!

Vince’s stomach twisted, and he covered his mouth, completely understanding why Asher looked ready to vomit. “We’ve been fucked over again? What the hell? There has to be an explanation. Drunk again…something… We have to… Shit. When they come online, I’m not gonna roll over for him again. What the fuck?” He tore from Asher’s grasp and tugged his hair, letting the angry tears come.

Vince grabbed the edge of the sofa and forced himself to sit down, his face buried in his hands. “What the fuck is going on over there? You know, I wish they’d never gone. I don’t care what it means to the band anymore; I want him home with me!” He kicked a textbook off the table, his anger evident. “Fuckers! I’m so sick of being lied to and being left behind. No one wants big, nice, sweet Vince! No one!” He leapt off the sofa, went to the kitchen, and hung his head over the sink. The tears wouldn’t stop.

He jumped when Asher’s hands slid around his waist and his head rested on the back of his neck. From the way his body shook, Vince was pretty certain he was crying, too.

“I’d have sworn my Billy was different. I knew him before we even dated. Gawd, we couldn’t get enough of just hanging out together.” Vince turned and leaned his head against Asher’s. “I guess it didn’t mean very much to him, did it? If being away from us this short a time makes them do this…” He paused. His head and heart were in torment. He felt awful for Asher, too. He and Erik had a tumultuous relationship from the very beginning and although he’d thought it was fine, it sure wasn’t now. The computer beeped, and he glanced over. “Fuck. They’re gonna come online now. I don’t even know what to say.” He looked at Billy’s ring and wanted to toss it across the room.

“Well.” Asher drew his spine up straight. “I, for one, am going to get some answers. I don’t care what you do with Billy, but as far as me and Erik go, unless he has some pretty good reasons for what happened, this is it. We’re over.” The computer beeped again, and the call was live.

I know you probably get asked this a lot, but how did you guys get together?

Erik: It was all kinda karma ya know, Billy's been a drummer forever, so we kinda hung out and did the duet thing, then Joey showed me up on guitar, and it just all kinda fell into place.

Billy: I've always been drawn to music, and my best friend being a singer, it seemed totally right. We hung out and like he said did the duet thing; and Joey and Daisy totally rock on their strings.

Joey: I met these two a couple years ago in the freshman talent contest. We'd hang out and kinda mess around, but didn't get serious until pretty recently. Daisy just joined.

Daisy: What can I say? We uprooted from a small town in the UK to this crazy place and I was kind of lost. Then I met Joey and my world lit up. (She drapes her arm around Joey’s neck and they bump foreheads)  He introduced me to the sweetest guy in the world and his kind-of-dumb, but rocking best friend and the rest is history. I love to play and to get to play with my best friends is like a dream come true.

Erik: Oh man, that's been my thing from the second I heard it. Kurt Cobain, dude. He was the bomb! I'd watch that video like a million times and got it all down by heart. Such a wreck.

Billy: Totally, I watched with you sometimes. The drummer was awesome.

Erik: Man, the vocals though...it hit me bang on. So yeah, I've loved it from second one.

Billy: Which got me into it, and here we are...grunge band reboot

Joey: I’m along for the ride. I’m not a particular fan of grunge, I love all kinds. (Shrugs) It’s all cool.

Daisy: I’m playing the long game. I’m going to get Erik singing pop before we end. (cracks up laughing at the expression on Erik’s face) Psyche!

Erik: Ha! Damn....Zeppelin? That would've been sweeet. Dude. Metallica? Any of those older classic rocks bands. I'm not sure about opening...

Billy: Dude, you are so a throwback. (rolls his eyes) no way. Alternative, Coldplay, Imagine Dragons, hell I love Zeppelin too, if I could be like Bonham.

Erik: I'd absolutely do anything with Nirvana.

Joey: I'm down with that. Just lemme play guitar like Jimmy Page and we're alll good.

Daisy: Ah man, I’d kill to perform with Flyleaf, but I’ll take Katy Perry or Gaga. Maybe one day I’ll get to perform with Lily Allen but I’m not taking any of these scruffy dogs with me.

(Daisy laughs and sticks her tongue out at him.  Erik punches her lightly on the shoulder)

Joey:Hey, hands off the lady, dude

(Daisy hugs him and kisses his nose.)

Daisy:Down boy. I love that I’ve got my very own guard dog.

Daisy: I have to agree on Chris Hemsworth. He’s smokin’ hot, but he’s funny too. A nice guy, not just pretty.

Erik: Gotta love that Nicole Kidman too. Her style rocks. I wouldn’t say no to a bit of that.

Joey: My Daisy is the only girl I see.

Daisy: (kissing Joey) Aw you’re so sweet. I’m so sorry, honey, but if Andy Biersack turns up and starts singing to me you won’t see my arse for dust. I know, I know, Black Veil Brides are Asher’s taste not mine, but wow that voice. I’m sure I could get him to sing just about anything I want. (She winks at Joey who mock pouts then grins)

Billy: (shakes his head) Shocker! I'm good with huge crowds of fans too, the drummer is usually hidden, so I'm up for a little recognition. (gets elbowed in the arm) ok

Joey: Aw man, I'd love signing autographs, big cheesy smiles for photos, living the dream life with my buds and my babe, a lot of recognition. (smiles)

Daisy: For now I’ll just take being settled and happy. It’s been a tough couple of years and I just want to take a breath and play. Although…if things happen I’ll be just as happy to unsettle again, as long as it’s for the bright lights and big time.

Well, thank you everyone for answering so…er…honestly. It’s been very nice to meet The Von. Congratulations on your launch, and hopefully we’ll be seeing more of you very soon.

S.L. (Stephanie) Danielson began writing at the tender age of five. She knew it was her calling from the moment she put pen to paper. In her teens she began writing alternative works and the genre stuck. She created ever more elaborate tales and finally in her early 20’s years began to create works with her new love; male/male romance. She has since written more than 30 works (both solo and collaborations).

Stephanie is classically trained in business, accounting, and HR/training, possessing both an undergrad and graduate degree. She also owned and operated Romance First Publishing where the ultimate goal was to help other unknown, as well as known authors get their start in the publishing world.

Beyond writing, her other hobbies include: painting, gaming, and spending time with her husband and two cherished cats.

Born into a poor but loving mining family in the United Kingdom, Cheryl grew up in the beautiful and history rich South Wales Valleys, becoming the first in her family to attend university. Practicing law, as a family lawyer for over twenty years allowed Cheryl to learn more about human nature at its worst and best moments, and develop empathy and a view of life not limited by social standing or background.

Tapping into the heritage of her people that throughout Earth's ages welcomed the wandering bard into the hearts of their villages as keepers of lore, Cheryl trained as a Druid and brings the richness of her Celtic past and spiritual training to elevate her writing. Since a child, Cheryl has been fascinated with other worlds, which exist within and alongside her own and has reveled in creating worlds and characters for others to enjoy.

Despite lack of family support, Cheryl continued writing privately and eventually found the Gay Authors website. With the positive response and a warm welcome received, she found the confidence to pursue her passion to a greater degree. Feeling gay fiction was a woefully neglected corner of the market where readers were all too often presented as limited to erotica, Cheryl strives to write quality gay fiction where sex and sexuality is not the central premise. Instead, concentration is given to character and narrative development through storytelling that goes beyond the physical. 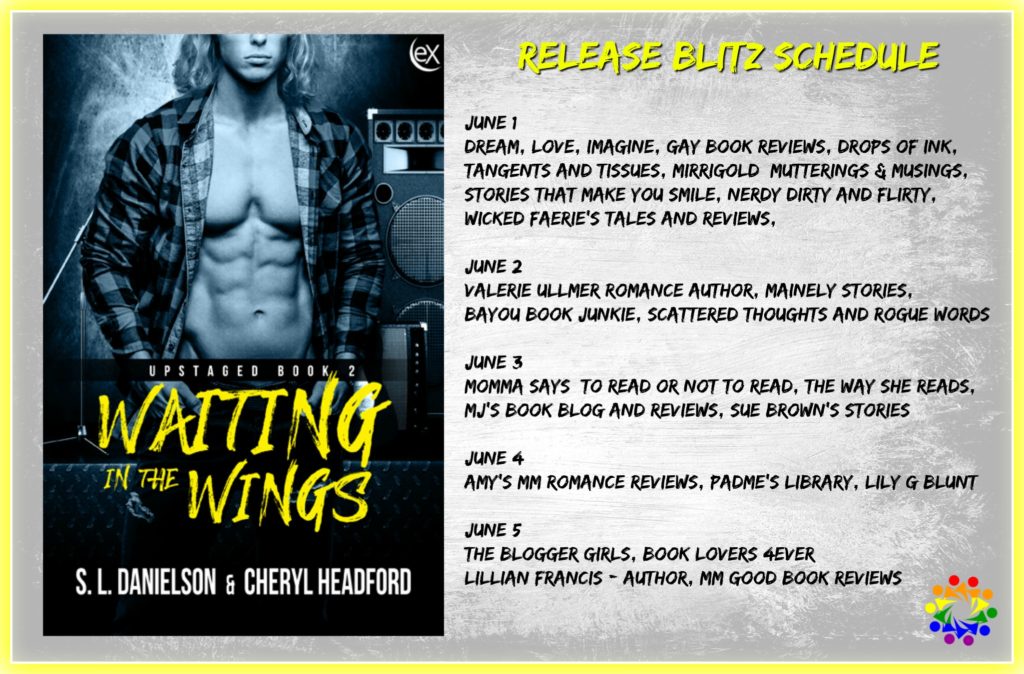