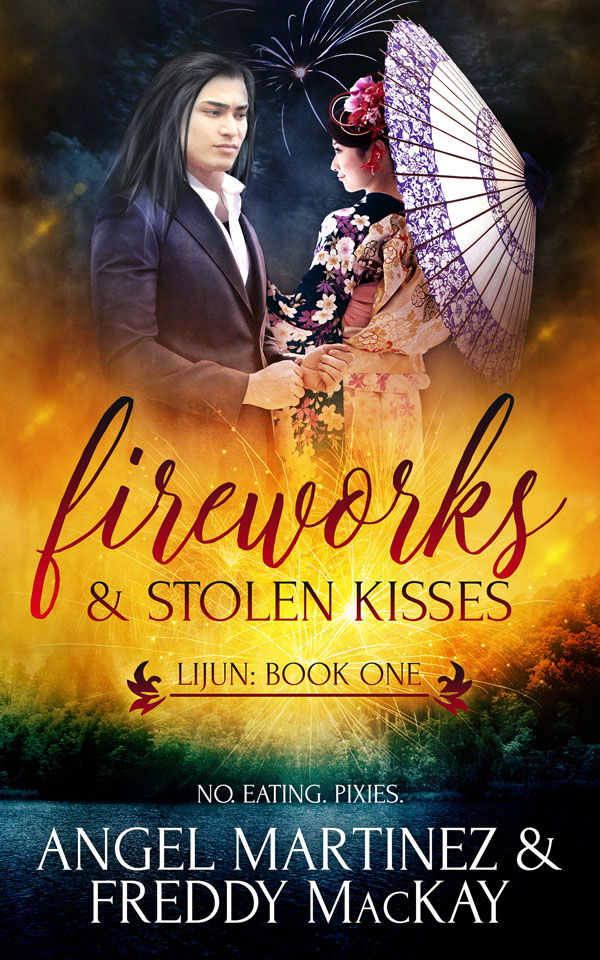 At the annual Global Lijun Alliance conference in Tokyo, Tally Bastille makes the first impulsive decision of his life. Others perceive his uktena—the enormous legendary serpent that’s his dual-spirit—as a threat, which makes him all too aware that he frightens fellow lijun. But an encounter with a passionate, obviously not-straight otter lijun one evening convinces Tally that he’s found his Em’halafi, his destined match. Tally is determined to barrel through all obstacles to make the match happen, including the otter’s conservative, traditional family.

Trained as a Satislit—a bride-son—Haru Tanaka chafes at the strict boundaries set around their life. They rebel against their clan’s constant attempts to force an arranged match and wish desperately for someone who will love them. At the conference, Haru is horrified to learn their family has accepted an offer for them, one too lucrative for the clan to refuse. Not only has the Urusar sold Haru to a stranger, but the lijun is also a giant snake and one who believes in the tired old superstitions regarding Em’halafi. Threatened with banishment if they refuse, Haru has no choice but to marry the wealthy American serpent.

Back in Tally’s home in Wisconsin, Haru and Tally must navigate both the widening gulf between them as they realize how much they’ve misunderstood about each other, and the tricky politics of the lijun clan Tally leads. Murder, intrigue and increasing hostility threaten to tear apart the little town of Wadiswan and the arranged marriage they’ve barely managed to begin.

From the time humans became a unique species, the lijun have lived among us. Dual spirit beings able to change at will between their human halves and their animal halves, at different periods throughout history lijun have been revered, feared and reviled. Modern lijun realized some time ago that their survival in the human world depends upon successful, peaceful integration—a partnership with humans who are unaware of their existence. But in the little town of Wadiswan, Wisconsin, tensions between rival factions run high, escalating to the point where the secretive lijun community risks exposure. The survival of lijun everywhere may depend on which side wins.

Back straight, back straight. Is this person my social equal? Tally offered a futsurei to be safe while the evening’s host introduced him as the new Urusar from Wisconsin. He wished Dad had come with him. As hard as he tried to think of this as just another business conference, the names and places had started to run together. Back home, he might have reached for the worry stone in his pocket. Here, that might be rude.

The ballroom was gorgeous, with the doors to the terrace rolled back to reveal the view of Mt. Fuji. Tables groaning with food lined the walls. Arrangements of blood-red flowers decorated every table. Everyone seemed to know everyone else, though that might have been an illusion created by nerves.

“Wisconsin?” the middle-aged woman inquired with reserved decorum. “That is the state of cheese, yes?”

“Very true.” Damn it, he’d forgotten her name. She was the Uruma, the village mother, to one of the larger cities to the south. “Though thankfully the state is more than just cheese.”

She laughed politely, turned to greet another conference-goer, and Tally hoped it had been a dismissal. He shouldn’t have felt out of his element. Employees depended on his decisions all day, every day. Meetings were his lifeblood, or at least took up most of his life. Not to mention these were his people. The perfectly draped Global Lijun Alliance banner dominated the front of the room—there for anyone, human or lijun to see. For the humans, it was simply a trade organization. For the lijun, it was survival, a shared bond of secrecy and a way for lijun communities to thrive.

Except Tally would always stand outside, which simply made diplomacy that much more important. When his father had gleefully announced his retirement as Urusar, village father of their community in Wadiswan, Tally knew his duty. He’d been groomed for it all his life. He’d taken up the leadership mantle with the sobriety and respect it deserved, even though some of their lijun neighbors had whispered about another deadly serpent leading them.

Tally couldn’t escape his heritage or his lijun type, but he was here at this conference to continue his father’s work—to ensure his community thrived, that the lijun under his care were safe, and to fight against the ancient prejudices that branded him as dangerous.

He retreated to one of the buffets to nibble on sectioned oranges with his back to the wall so he could observe. Not everyone at the welcome dinner was as bound by formalities. The younger attendees had dressed in a variety of styles and more or less appropriately. Nearer the terrace, a young woman in a leather miniskirt tapped her boot heel to music only she could hear. On the other side of the room, a handsome young man in a strange mix of business formal and rebel-casual lounged against the bar. The suit jacket and expensive jeans fit in well enough. The faded T-shirt and rainbow suspenders? Not so much.

Tally thought he would introduce himself to this interesting person, but an older gentleman beat him there and spoke urgently to the young man, who made an impatient gesture and stalked off.

Too bad. He’d been an…otter? Tally surreptitiously flicked his tongue out to taste the air. Difficult to tell in such a large gathering, but he was sure he was right. Something beyond the rainbow suspenders drew him to the otter, a yearning that he didn’t want to deny. He was about to follow when someone touched his arm.

“Herr Bastille, is it not?” A man with flame-red hair, an educated European accent and a calculating smile stood at his elbow. “I am Gerhard Klug. I understand you are a hotelier?”

Tally offered his hand rather than a bow and smiled in return. “Good to meet you. Tal-tsu’tsa Bastille. Everyone calls me Tally. Yes, I run the family business back home. Several properties.”

“Good. Good.” Herr Klug put an arm on his shoulder and steered him toward the bar. “I’m hoping we could discuss a possible business arrangement.”

“I’m always interested in discussion, Herr Klug.” Tally signaled the bartender. “What are you drinking?”

“Gerhard, please.” The fox lijun laughed. “You’ll make me feel old. And they have a pear brandy here that is good.”

Tally ordered the brandy and a whiskey sour for himself. Yes, Gerhard was obviously here to woo him, but Tally didn’t like being put at a disadvantage right from the start, even with something as small as who paid for drinks. “What is it you do?”

“I have glassworks,” Gerhard said as he hopped onto the stool next to Tally’s. “My family has been in glass for several centuries. While we have commercial lines, we have sites dedicated to custom work, as well.”

Tally had the oddest image pop up at the phrase in glass of littles foxes running about under cheese domes. Of course he knew what Gerhard meant and the more focused part of his brain perked up at the mention of custom work. “Oh? What sort of custom work?”

Gerhard pulled a small tablet from inside his suit jacket. “For restaurants. For hotels. Erholungsort…what is the word? Resorts.”

Tally answered the fox’s calculating look with a soft laugh. “I have the feeling you’ve brought a portfolio. Please, let’s have a look.”

“Thank you. It’s very kind of you to give me a hearing.” Gerhard opened the tablet between them as their drinks arrived. “We have contracts across Europe. This first set is work we recently added for a winter resort in Sweden.”

They leaned in together to inspect the photos, Tally nodding and asking questions here and there. The images showed wine glasses, water goblets, tumblers and beer glasses in beautiful shapes and colors, with the property name and logo etched discreetly into each piece. Tally particularly admired the champagne flutes with the snowflake-shaped feet. Lovely, though he gave no outward indication that he reacted to any one set more than another.

When they reached the end of the photo samples, Tally sat back, sipping at his whiskey and making Gerhard wait. “It’s a very interesting thought. Though I imagine a certain percentage of that pretty glassware vanishes from the properties as souvenirs.”

“Ha. I’m sure some of it does. Though not offering the prettiest glasses in the guest rooms most likely reduces that number.”

Gerhard’s eyes twinkled as he laughed and if Tally had been someone who craved casual sex, Gerhard might have been a candidate, but his heart would only be half in it. The other half had already left the room with the handsome otter. The suspenders were a beacon, a flare sent up, and Tally was going to speak with the otter of definitely-not-straight orientation that evening if it killed him.

“I’d like you to work up some samples with the resort manager at Sapphire Lake.” Tally didn’t mention immediately that the manager was one of his sisters. “We’d need to see physical pieces, of course. Then we can discuss the possibility of starting a small contract there first. I do have properties in Europe, but allow me to begin closer to home.”

When Gerhard Klug finally let him go with an exchange of business cards, the otter was nowhere in sight. Uncharacteristically disgruntled, Tally left the main ballroom to check some of the smaller venues where different sorts of food were on offer. The first meeting room had been set up as a sushi bar, which seemed a good place to find an otter. He wasn’t there. The second was a room dedicated to international cuisine, offerings from host countries of previous years. No otter.

The third was a paradise of desserts which had drawn the children since the beginning of the evening with its siren song. Tally hurried his steps when he picked up shouting from that direction and he skidded to a stop in front of the door.

Freddy is a bisexual, biromantic, genderfluid nerd and geek who grew up in the Midwest playing soccer, diving, swimming and doing gymnastics, along with running around outside as much as possible—preferably spending that time in swamps and hiking through forests. The haphazard escapades have not changed, except some of them have been replaced with a healthy geocaching addiction and a love for Science Fiction and Fantasy. This love of SFF developed into a writing passion and has led to several awards in the gay science fiction and fantasy categories. Freddy likes worms, dancing and being outside... and toll passes, but you'll have to ask on that one. (They/Them/Their pronouns.)

The unlikely black sheep of an ivory tower intellectual family, Angel Martinez has managed to make her way through life reasonably unscathed. Despite a wildly misspent youth, she snagged a degree in English Lit, married once and did it right the first time, (same husband for almost twenty-four years) gave birth to one amazing son, (now in college) and realized at some point that she could get paid for writing.

Published since 2006, Angel's cynical heart cloaks a desperate romantic. You'll find drama and humor given equal weight in her writing and don't expect sad endings. Life is sad enough. She currently lives in Delaware in a drinking town with a college problem and writes Science Fiction and Fantasy centered around gay heroes.

Angel and Freddy are giving away a $25 Pride Publishing gift certificate with this tour. Enter via rafflecopter for a chance to win: