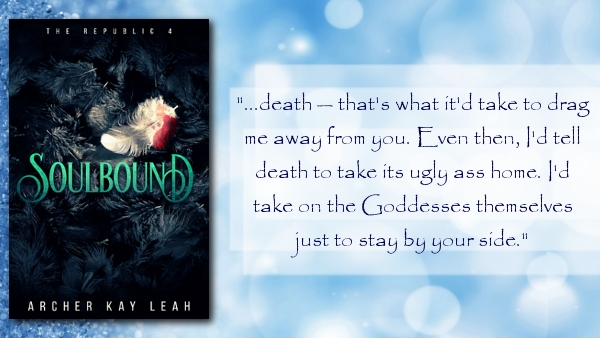 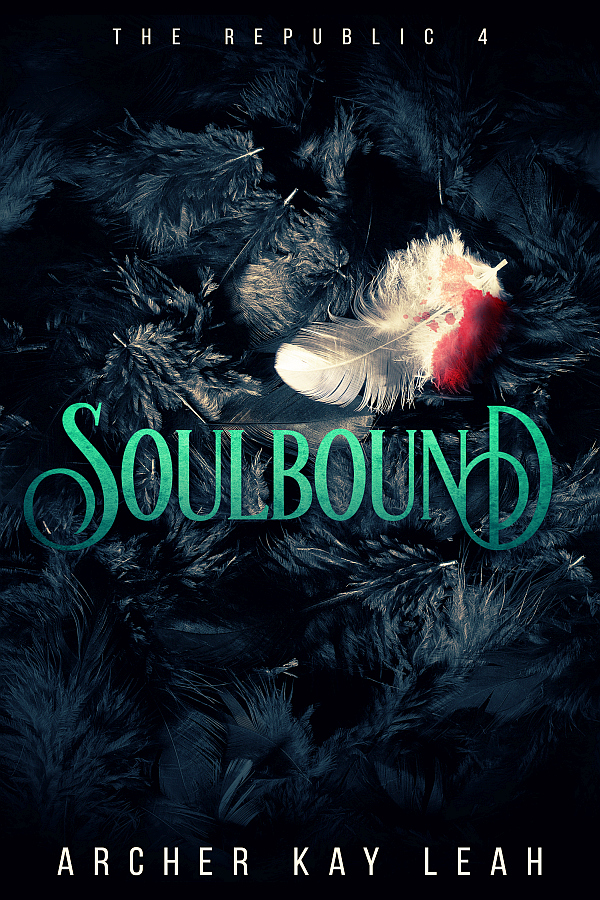 In a relationship that violates rules and expectations, Mayr and Tash have found their perfect match in each other. Despite their fears and difficult pasts, they hope for a shared future with security and a family. When Mayr's secret first love, Arieve, proposes they create that family with her, it seems dreams could become reality.

But life is complicated, and so is the delicate balance between duty and love. While Mayr protects the Dahe family at all costs, Tash is determined to succeed as a priest. Both positions require sacrifice, forcing their relationship into painful choices. To make matters worse, criminals lurk in the shadows, seeking revenge on them and those they guard.

The life they want risks losing everything—including Arieve and each other. Even if they can have it all, keeping it may take more than they can give.

With the right people and the right price, the Republic of Kattal can be brought to its knees. But for every line crossed, someone waits on the other side, ready to push back.

Magic may lurk in the shadows. Crime may never sleep. But love doesn't back down. 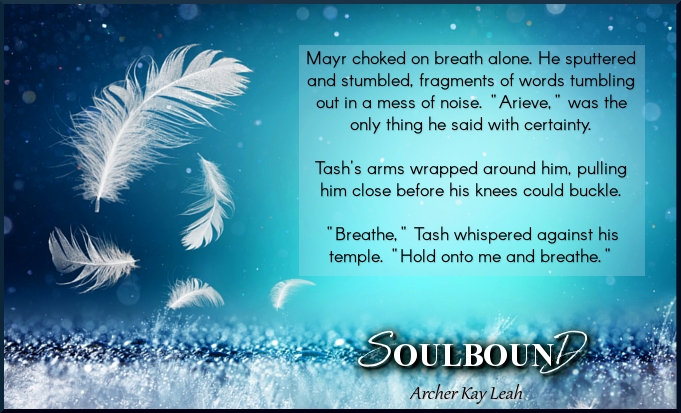 Silence fell, deep with meaning conveyed by long gazes and soft smiles. Why had he expected Aeley to say anything different?

Three loud knocks rapped the door, scaring them both. Cursing under his breath, Mayr opened the door.

Every foul word tumbled back down Mayr's throat. "Hey." He leaned against the door, one arm sliding up the side.

In an instant, he tripped on his own feet and stumbled into the door, swinging it open further.

"You can't possibly be drunk already." The corners of Arieve's eyes crinkled with her smile, her glossed lips painted pink like her cheeks. Dark curls and plaits cascaded over her shoulders, the firelight lending a golden hue to the white-blonde streaks in the fringe of hair across her forehead. She held a silver tray, presenting two glass goblets filled with a bluish-purple drink and fragments of gold leaf sprinkled on top. "Otherwise, this might be a bad idea."

"What's a bad idea?" Mayr grimaced, his mouth suddenly dry as if filled with pillow stuffing. Quick to recover, he smoothed his shirt, resettled his belts, and slicked back his hair, pretending he meant to be clumsy.

"Your after-dinner drinks. Lira was going to bring them, but I thought I'd save her the trip. She's having fun trading stories with your mother." Arieve cleared her throat. "I didn't want to interrupt your conversation."

The tray rattled in her hand. The drinks threatened to slosh over the rims.

Mayr steadied the tray. "Thanks for that. This. These." He offered her an awkward smile and took the goblets. "I'll let you get back." So you won't see me kick my own ass for being completely inappropriate.

"You're welcome." Arieve hesitated as she lowered the tray. She swayed gently, the rich green layers of her tiered, ruffled skirts moving with her. "I'll let you finish."

Before Mayr could say anything else, Arieve hurried down the hall and around the corner.

"I wonder what the mix is this time." Aeley snatched one goblet to sniff it. "Hint of gaffa nectar, soured pamolea extract, and a bite of fulore. Plus maybe, probably—" another sniff "—syrup from the Sailor's Sweetheart bush." She took a sip and nodded. Flakes of gold leaf clung to her top lip. "Not as fun as last night's concoction, but I could get used to it."

"That's what you always say." Mayr brushed the flakes from Aeley's lips with his thumb.

Aeley wiped her mouth on her sleeve. "Not always, just a lot. Cook knows her stuff. To be fair, she's known me since I was three, getting into her puddings and tarts anytime she turned around. I trust that when she serves up a hodgeypodgey drink, it's got personality." She tapped her goblet against his. "I'm heading back to our guests. You should, too, considering it's yourparty. We can resume this conversation later."

After a kiss to his cheek, Aeley flounced out the door and through the corridor, humming to herself.

Mayr stared into his goblet, watching the gold swirl in an abstract pattern. My stomach. My head. I can't even…

He set the goblet on Aeley's desk. He needed Tash's forgiveness more than he deserved a fancy drink.

As he exited the room, questions assaulted him hard enough to drown the sound of the door latch as it caught. One question practically shouted above all the others: how much had Arieve heard of his conversation with Aeley?

His heartbeat faltered. He was mortified. The door was not impervious to sound. What would Arieve think of him had she heard…

Hey, stupid! It doesn't matter.Mayr grumbled and hooked his thumbs around the back of his belts. It still comes out to you're taken and happy, so shut up.Dragging his heels, he wandered through the corridor and turned into the next, towards the ballroom.

Around the corner, Arieve leaned against the wall, head bowed, with her face hidden by her hair. She twined the trailing black laces of her bright green tunic around her fingers and pulled taut, then released them only to repeat the process. The empty tray rested beside her, abandoned against the wall.

"Hey." Mayr stopped, careful to leave two foot lengths between them. "I thought you went back?" He toyed with his marriage ring, twisting the band nervously. Memories of Tash surged forward, the airy weight of his kisses almost real enough to feel.

"I wanted to wait for you." Arieve raised her head and offered a tender smile. "I probably won't get a word in the rest of the night given the company, so I thought…"

She was in his arms before he could reply. Her hug stole his surprise, shredding it until all that remained was stunned.

"Congratulations," she murmured, her forehead tucked beneath his chin. "He's got a good heart, solid. You've found your match. If the Four could grant me one wish tonight, it'd be for you two to have everything you desire."

Mayr hesitated, his hands hovering over Arieve's back. Touching was a bad idea, especially while he kept Tash from the truth. "Thank you." Quick as he could, he embraced Arieve and pushed her away, feeling worse than the coward he was. "Let's go back. I need to stop my mother from revealing every baby story she has or everyone's going to hear about my naked backside and trailing diaper crowns."

Arieve picked up the tray and started up the hall. "I'm sure Tash is soaking them up as we speak." She laughed, the joyous sound digging up a dozen memories.

Memories he needed to lock up and burn down.

He followed Arieve and cast his gaze to the ceiling. Please, Reverent Goddesses, get me through tonight. Then let's talk about strength of will, because one of these days I'm going to have to confess everything and it'll hurt more than scorching my pride. 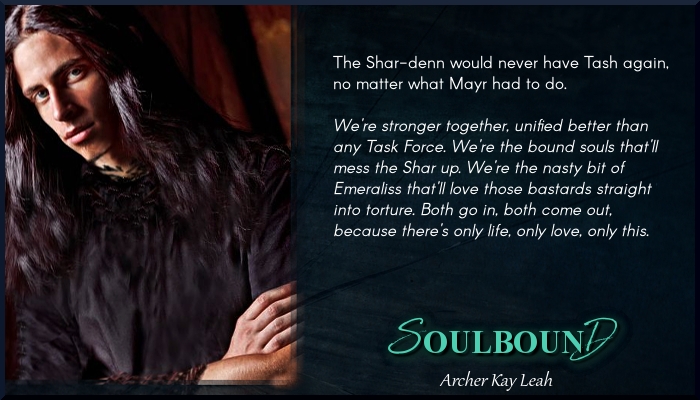 Archer Kay Leah was raised in Canada, growing up in a port town at a time when it was starting to become more diverse, both visibly and vocally. Combined with the variety of interests found in Archer’s family and the never-ending need to be creative, this diversity inspired a love for toying with characters and their relationships, exploring new experiences and difficult situations.

Archer most enjoys writing speculative fiction and is engaged in a very particular love affair with fantasy, especially when it is dark and emotionally charged. When not reading and writing for work or play, Archer is a geek with too many hobbies and keeps busy with other creative endeavors, a music addiction, and whatever else comes along. Archer lives in London, Ontario with a bigender partner and rather chatty cat.

Archer is giving away three $10 Amazon gift cards with this tour – enter to win via Rafflecopter: