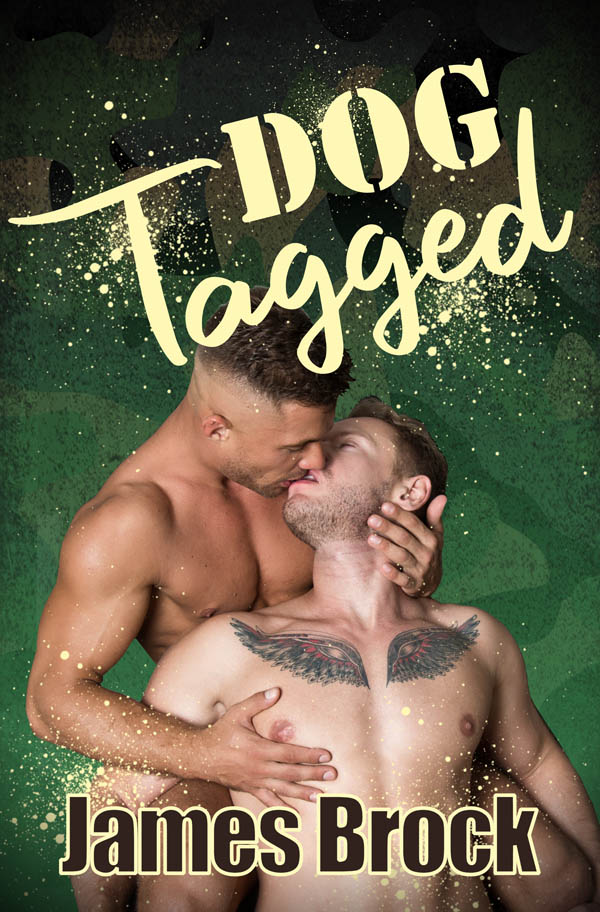 Drill Sergeant Clay Norris has his military life running right on schedule.  Career focused he appreciates that he joined up when his sexuality is at least acknowledged under Don't Ask, Don't tell, even if he doesn't get to act on his urges as much as he likes.

In formation with his new trainee group he locks eyes with Chevrolet Banks and his life, their lives, are changed forever.

Dog Tagged is an insta love military romance based on real life incidents. 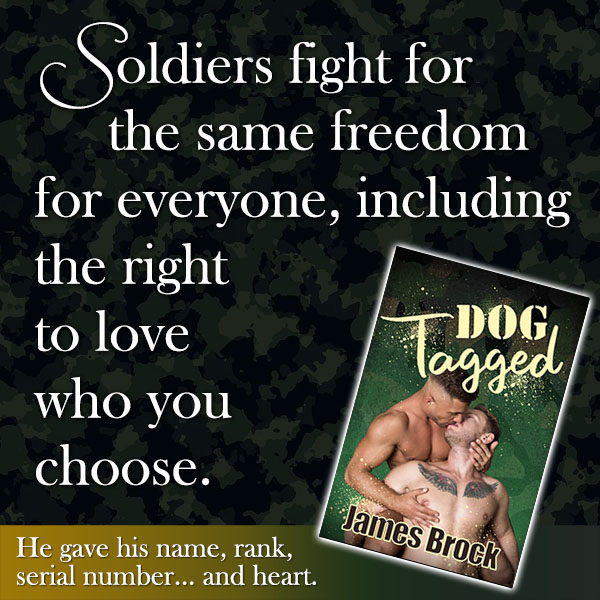 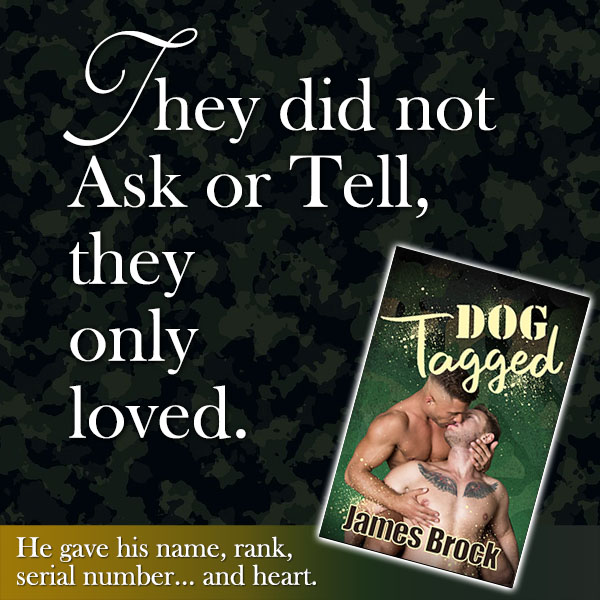 What also became clear to me in my short time with the fun, cute guy was that I had fallen so hard for Private Chevy Banks that I couldn’t get him out of my head even standing next to this walking hard-on.

I did let the hot salesman give me a quick kiss on the cheek in the changing room and tried to forget the warmth of his lips as I headed out to the clubs and got some dance and further drink on, always bearing in mind that I was an officer now and had some decorum to maintain.

Okay, all that means is that I got pretty wasted.

At some point I looked up to see the smiling face of Evan the clerk from the clothing store next to me, an arm thrown protectively thrown around my shoulder. His sweet smile was the brightest of the lot, I latched onto him like an octopus gripping a clam.

I have no idea how long the revelry went on or how I got back to the hotel.

The next morning I woke not feeling well at all. Slick with sweat, sick to my stomach I rolled my head on the pillow slowly, not knowing what kind of guy I was going to find next to me. Thankfully the pillow was empty, as was the bed, although the blankets were mussed enough to let me know someone had recently nested there. Carefully lifting myself I checked the floor and was relieved to see no other bodies in the room.

But at that moment the bathroom door opened and a figure came out.

Evan, blond and sunny, cute as the night before in tattered jean and a faded green t shirt with a cracked and worn logo on it stepped into the darkened room.

“Hey buster, didn’t think you’d be up for a while,” he said with a giggle in his voice.

Flopping down onto the chair across the room he slipped his feet into athletic shoes and laced them. “Or should I be calling you Lieutenant Buster?” he added with a nod toward my dress uniform hanging neatly in the closet.

“Just call me a time machine man, I wanna go back about twelve hours and start over again.” I sighed from the bed. “What the fuck happened….”

“What didn’t happen is the better question,” Even said evenly. “you were wined and dined, if you count the bag of Dorito’s you were given to strap on like a feed bag dining, given drinks and very nearly given drugs and taken to other clubs and there was talk of taking you to that skeezy bath house connected to the dance club, but you wouldn’t go anywhere without me once I had been spotted. You seemed to be quite taken with modest little moi and since I refused to go to that bathhouse everyone was trying to get you to go to I finally got you back here where there were more drinks and salty snacks then there was some crying….” he trailed off. “I’ve ordered room service for you; hope you don’t mind.”

About that time there was a knock at the door; Evan let room service in, signing the check. “You are a good tipper, just so you know,” he grinned while pushing the tray of food over toward me on the bed then pouring coffee. He motioned for me to eat then sat back down. “I was going out anyway so when I closed up I came over to the club and there you were, gaily lit as a Christmas tree and surrounded by faeries more headstrong and stubborn than Tinkerbell all out to get a piece of the hottest man in the city. Not the bar, the city. And I’m not just saying that because I am the one who ended up sleeping with you.”

I guess I looked up at him like a deer in head lights.

“Stop, don’t flatter me. I’ve got it going on but I’m not ripped like you. Word was out that there was a military hottie on the hoof in the club and every muscle queen and gym bunny in town showed up to audition as your hook-up for the night. I think guys were flying in from LA and San Francisco trying to get to you,” the blond smiled.

“So you brought me back here and we….” I said, mouth full of egg. The food was going down smoother than I expected it would.

“I didn’t get in the way of your fun too much, I just kept an eye on you. Until they started to undress you and began offering you pills, powders and potions.”

I felt myself shudder and freeze.

“Don’t worry. I didn’t let them. I just brought you back here, where you insisted on another drink or ten. Then you got weepy and I held you and let you talk about a car until you fell asleep. I dunno, everyone has a kink or two, but I’ve never heard anyone rhapsodize about a vehicle the way you went on and on about your Chevy last night.”

I was really embarrassed then.

I let a silence settle between us before taking a sip of scalding hot coffee and replying.

“I fell off a turnip truck but that was a long time ago,” he smirked while reaching over and snagging a crisp piece of bacon off my plate and began chewing on it, “I figured as much.” Evan said with true kindness in his voice. “I had a brother in the Army and knew you were just blowing off some steam. Those wolves would have eaten you and I like to think someone would have looked after my brother the same way. Nothing happened between us.”

“That would have been the best part of the night it sounds like,” I managed, no longer interested in the food.

“You were a hot mess, but I am very glad you are alright. Now I’ve gotta go to work. If you are in town for a while here is my card.” With that Evan produced a business card with his name, number and e mail on it. “Use it at will.” he slipped the card on the breakfast tray then slid his arms around my body, giving me a very nice hug.

“Leaving tomorrow, but some other time without question.”

Stopping at the closet on his way out he reached in and touched the sleeve of my dress uniform.

“Are you going over?”

There was a slight pause before he broke his eyes form the uniform.

“Be safe. E mail and let me know how you are. Promise?”

“Promise, and thanks. Is your brother back?” there was a pause before Evan answered Yes in such a quiet way that I knew the way his brother had come home.

“I’m sorry,” was all I had time to say before the cute blond turned and gave me a wan smile and slipped out of the room.

Once upon a time he sold comedy to Joan Rivers and Phyllis Diller, was published in every gay men's magazine on the market (when there was a market, those dinosaurs were killed off by DVD, which were in turn eaten by streaming and on demand...), the Seattle Gay News and Seattle Standard and essays with the late great Alyson Publications.

James is giving away a $20 Amazon gift card. Enter via Rafflecopter: