This book was originally published as a short story, Going Down: Trapped In The Elevator With The CEO, on Wattpad and AO3. 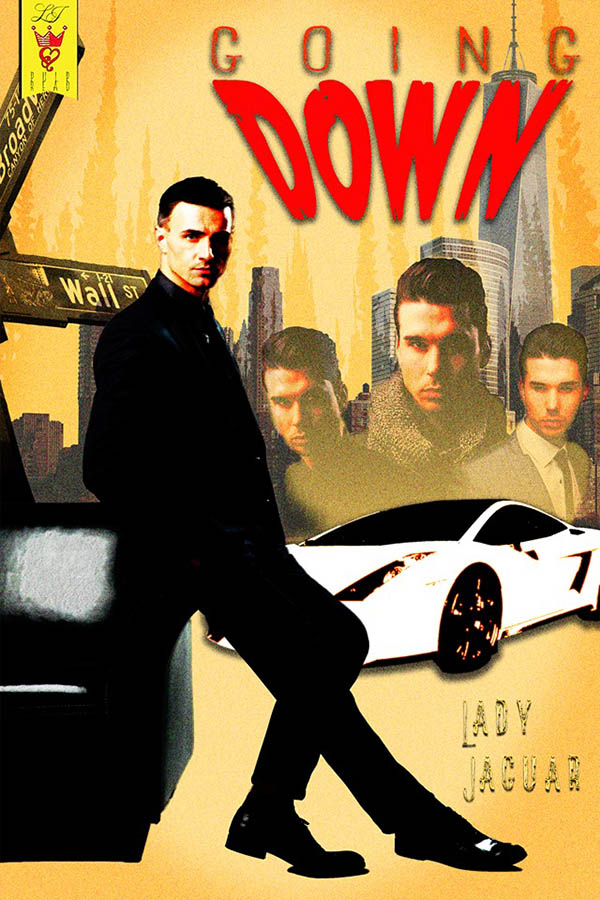 A misunderstanding leads to seduction, then a life-changing job offer…

Tino Santini is calm and decent with a core of steel, qualities he needs when he is offered the role of PA to ferocious CEO, Richard Mason.

The opportunity arises after Tino is trapped with Mason in the office elevator just before Thanksgiving. A bottle of brandy kickstarts a night of scorching sex which does wonders for Tino’s flagging career.

Pansexual multi-millionaire, Richard, has it all; wealth, success, commitment-free sex every time he snaps his fingers, but a former female lover, a New York gangster and a murky past all threaten to destroy his chance of happiness.

Tino gradually learns who his boss really is, whilst willingly keeping him happy both in the bedroom and out of it. Neither of them expect their relationship to be anything other than business, until a personal tragedy means that Richard needs Tino more than ever.

For both of them, that first chance meeting is the catalyst for a headlong plunge into sexual adventures, murder and possibly love. 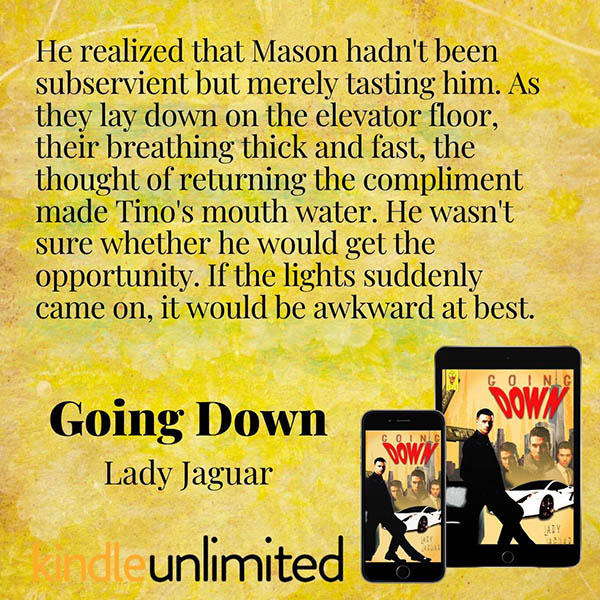 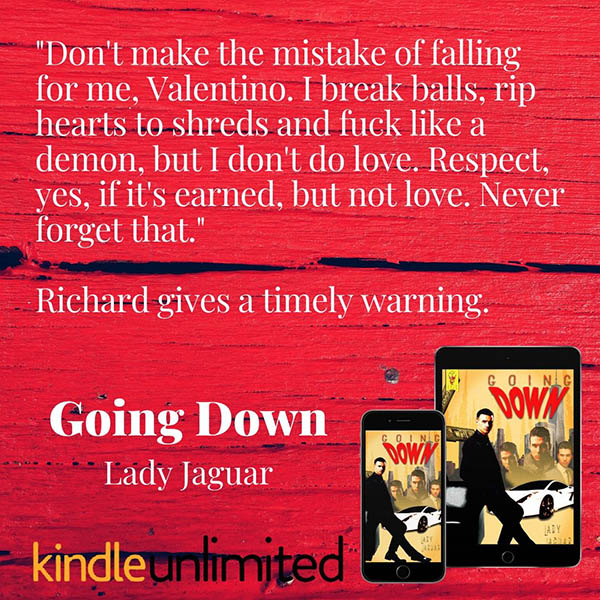 THE CEO’S OFFICE was behind a tall oak door with his name emblazoned on a silver plaque. Tino knocked and went in, figuring it was okay as Mason wanted him to follow in the first place.

The room was empty, so Tino went back outside and asked Eleanor what he should do.

“He’s probably in his bathroom,” she said. “Just wait for him in the office. Don’t make him come looking for you.”

Tino hurriedly returned to Mason’s office. The space was huge, with two glass walls giving views up and across Fifth Avenue. His black mahogany desk was also enormous, and mostly empty apart from a telephone, an ink blotter and an Art Deco lamp.

To one side of the office were two large grey leather couches and a smoked glass coffee table in between. The wall behind one of the couches was dominated by a large square artwork consisting of a series of blips and lines, black on white background. At the bottom was the discreet legend, Love Story. It didn’t make any sense to Tino, but he never pretended to be an art buff.

As he waited, perched on the chair opposite Mason’s desk, he tried to remember what he knew about the man usually occupying the large black leather chair.

Not much, apart from everyone knew he had an evil temper. There had also been some talk of an affair with a transgender hooker, and the supercars he had stored in the parking lot underneath the building. Tino had even heard a rumor that he’d killed someone once, with his bare hands.

He ran his finger around his collar, hoping he wouldn’t start to sweat. The man was terrifying, that much he did know. Some said he was a generous and fair boss who wasn’t to be messed with. Others called him Godzilla under their breath and tried to avoid him at all costs.

There was no doubt he polarized opinion in the office. Anyone who had received a tongue-lashing from him bore the scars for life.

Tino’s backside pimpled and he fought the urge to run. Christ, what was he doing here?

He heard the toilet flush, and within a few moments, Mason came out of another door on the opposite side of the office. He still wore his suit trousers but his upper torso was distractingly bare, revealing a broad chest smattered with silky black hair, and a Celtic knotwork band circling one upper arm. On his back, there was a wolf’s face, similar to the Wolfen company’s logo. As Tino continued to check out the CEO’s muscular swimmer’s shoulders and narrow waist, Mason threw his shirt at him, making him jump.

“Get that cleaned, will you?”

The garment smelled of him, and Tino had to resist the urge to bury his face in it. Instead, he watched as Mason covered up that divine chest with a fresh shirt and began fiddling with the cufflinks.

“Help me,” he said impatiently.

Immediately, Tino jumped to his feet and went to assist. The cufflinks were gold, the stones white diamonds. They must have cost the equivalent of half a year’s salary for Tino. He fumbled and dropped the second one.

As he bent down to pick it up, he noticed Mason’s feet were bare. No shoes. No socks, just long, prehensile toes and perfectly pedicured nails with black nail polish. He tried not to stare, concentrating on the task in hand.

When he had finished, Mason went to sit in the black leather executive chair on his side of the desk.

“First off, questions.” He clasped his hands on the desk in front of him.

Tino waited, staring at the snowy cuffs and sparkling diamonds.

Tino realized Mason had been asking him what his questions were.

“Oh, right! Er, yeah. A bit of a shock, coming in this morning and being told to clear my desk. Why do you want me, sir? I thought…”

Mason took a file out of his desk drawer and opened it. “Valentino Santini, born 1988, educated in Brooklyn. Average grades at best. Came to Wolfen as a filing clerk in 2012. Proved to have an aptitude for marketing and a pleasing telephone manner. Worked up through the company to become a junior manager and then…” He slammed the file shut. “Career stalled thanks to one ambitious little prick. I would fire him, but he gets results. So back to you. You’re loyal, discreet, bright and personable. Those are the qualities I need for someone to eventually take over from Eleanor. Also, the ability not to take shit from anyone, most of all me. You think you can do that, Valentino?”

“My question to you is, why would you want to? Work for me, that is??”

Tino opened his mouth and closed it again. “I… wasn’t given the choice, was I?”

Mason gestured impatiently. “Of course you have a choice. You think I want someone who hates the air I breathe? There are plenty of internal positions within the company, not only here but in any one of our offices. The pay won’t be as good but…”

“I want to work for you,” Tino said, cutting him short.

“I like a challenge. Someone says to me, ‘it’s impossible,’ I like to prove to them it isn’t.”

Mason smiled crookedly. “You expect to have me eating out of your hand any time soon?”

Wow. For a moment, Tino couldn’t speak. He was mesmerized by the man in front of him, enviable cheekbones, straight dark hair that spiked over a high forehead, cruel lips that had …

No, don’t think about what we did in the elevator, for fuck’s sake…

He snapped back to the present.

“One could argue this is a woman’s role. Being my Man Friday? Being at my beck and call? Listening to me when I’m jacked up on JD and wanting three whores in my apartment within fifteen minutes? Ringing you when you’re at your sick mother’s bedside and screaming at you for forgetting to organize my pastrami bagel? Threatening to fire you every five minutes? Do you really want to work for a blue-chip asshole like me?”

He came around to Tino’s side of the table and perched on the desk in front of him, impaling him with an intent glare. Tino could smell his sandalwood aftershave and something much muskier, beguiling him, screwing with his reason. He tried not to look at the man’s crotch. If he didn’t know any better, he was sporting a healthy-looking semi.

“I think I can handle you,” he muttered.

“Oh, I know you think you can.” Without warning, he took Tino’s chin in a strong grip and forced him to look up. “Don’t make the mistake of falling for me, Valentino. Eleanor probably already told you this. I break balls, rip hearts to shreds and fuck like a demon, but I don’t do love. Respect, yes, if it’s earned, but not love. Never forget that.”

“I have no intention of marrying you, sir,” Tino replied, deadpan. Inside his chest, his heart was beating so loud, he was surprised Mason couldn’t hear it.

Mason let go of his face, grinning savagely. “And that, Valentino, is why I want you. I think we understand each other.”

Lady Jaguar’s first den was in the depths of Archive Of Our Own and Wattpad, where she still writes fan fiction for Holby City, Good Omens and Doctor Who (Eight.)

Now she has ventured out with a story her readers asked her to write and is just about to place it at your feet like a dead rodent. Expect filth, high-octane frolics and every beloved romance trope known to mankind!

Lady Jaguar is on Instagram (when they haven’t banned her,) Twitter, and down with the kids at Tumblr.