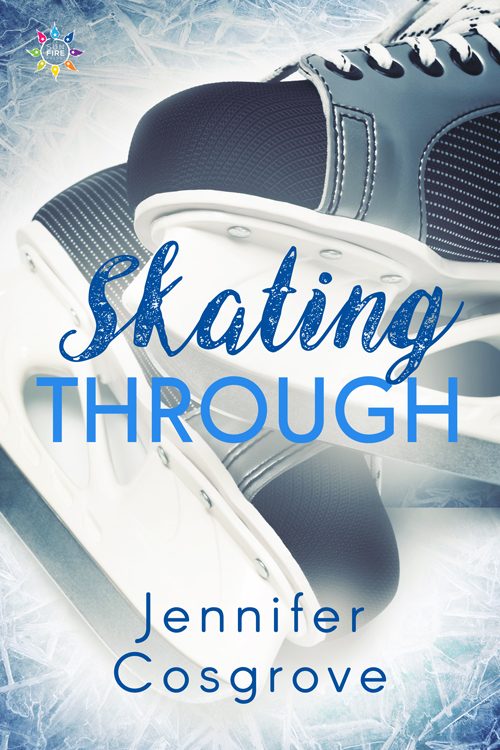 There are two things Ben Lewis has convinced himself he can never have at the same time: playing hockey and being openly gay. Hockey is looking to be his only choice. Until now. Being captain of the team and starting his senior year of high school is a lot to handle. Throw in a budding friendship with his crush, Marcus, and Ben is faced with deciding if he’s brave enough to take the next step.

Fortunately, courage can come from unexpected places. His BFF Ryan, new friends, and a voice from the past are great assists to his determination to be true to himself and keep playing the game he loves, but will they be enough? 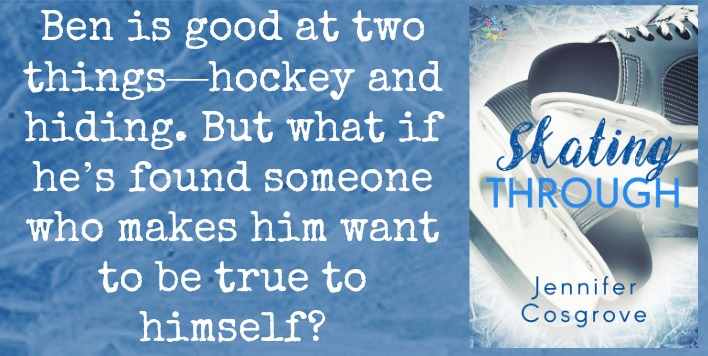 A murmured meow was Ben’s answer as Biscuit settled next to him, curling close to his side. He was wide awake. It was still dark outside, the only light in the room coming through the window from the streetlight on the corner. The alarm hadn’t gone off yet, but he’d trained himself to be up at the crack of dawn. He stretched, careful not to disturb the cat, and ran a hand through his hair in an attempt to flatten out the mess. He was in dire need of a haircut. Every year, he decided to grow it out, and every year, he changed his mind as soon as hockey season was on the horizon. It was just too much to deal with under a hockey helmet. Besides, he looked a little ridiculous with long hair.

He stared at the ceiling and let the rare quiet of the house wash over him. Most guys his age would sleep until noon, especially on summer break, but that wasn’t going to happen. The alarm started going off and Ben grabbed for the phone, accidentally knocking it off the nightstand along with his Band of Brothers DVDs and sending Biscuit scurrying away and out the door. He fumbled over the side of the bed, finally snagged the phone, and swiped across the screen to turn off the cheerful beeping.

Maybe he should just give in and go to the rink, get in some early ice time. He sat up and swung his legs over the side of the bed. His dad would probably get up and give him a ride. Ben rose and took a step toward the door. Or he’d tell him to go back to bed—it’s an off day, for god’s sake, Ben. Probably not, then. He shut the door with a click and got back in bed, scrolling through the texts from last night out of habit.

Ryan: he was in the shop again

Ryan: I didn’t say anything

Ryan: I wouldn’t do that

Ryan: you’re going to have to talk to him eventually

At that, Ben had put his phone down and gone to bed. Ryan meant well, but he wasn’t ready to deal with that. It just didn’t work that way. Not for him. Not now.

Ben looked at the time and groaned. When the phone beeped again, he turned it completely off and tossed it back onto the nightstand. He thought about getting up anyway but dragged a pillow over his head instead. Sleep deserved another try.

The next time Ben woke up it was to a pounding on his bedroom door that could only be one person. “Cut it out, Bethy!”

“Quit playing with yourself and get up, Benny!” The giggling that followed was cut short when he heard his mom’s voice coming up the stairs, followed by her light footsteps.

“Beth! Leave your brother alone.” A pause. “And don’t be crude.”

Ben rolled his eyes and struggled to sit up. There was a gentle tapping on his door. “Ben, honey?”

The door opened and she peeked in cautiously.

“Remember we’re going to help Gran today.” How could he forget? She’d reminded him every day for the past week. It wasn’t like he was going to suddenly develop amnesia or something. “And we need to leave soon, so if you want breakfast, you’d better get a move on.”

He definitely wanted breakfast. “I’ll be right down.”

“Hurry. The vultures are circling,” she said with a wink and closed the door behind her.

Ben got up, stretched, and rolled his shoulders. He thought about going through the flexibility routine Coach Jordan recommended, but he just didn’t feel like it. It was his day off, and he was going to stick to that. He let his routine slip a bit during the summer, and he’d get enough of a workout moving heavy boxes and furniture, anyway. His grandma was leaving the cold winters of upstate New York to escape to Florida’s warmer climate. She’d laughed when he told her she was a walking, talking cliché.

“That might be true, my love, but I’ll still be the youngest one down there.” It was true. She’d taken early retirement when his grandfather had gotten ill, and now that he’d passed, she had the means to make a move closer to her sister. He was going to miss her.

“Ben?” His mom’s voice floated up the stairs.

He sighed and picked up the DVDs that had fallen down beside the bed and started pulling clothes out so he could tell her, honestly, that he was getting ready.

Ugh. He’d better hurry. He could smell bacon, and either Beth or his dad would have no qualms about stealing it right off his plate. Always the bacon. And today it would be real bacon instead of turkey bacon, so that made it even more tempting. Not that turkey bacon ever stopped them. He felt a twinge of guilt for making his mom fix two different breakfasts most days, but it was something they’d lived with from the time he’d started high school. Ever since he got serious about hockey.

It was all he’d ever wanted to do. He’d known from the first time he stepped out on the ice. He was good at it, and he was lucky to have supportive parents. It hadn’t been easy. The equipment and fees were expensive, and the demanding training and game schedules were always a challenge. But he was never late to practice, and they’d never missed a home game. It would be worth it, he thought. The college scholarship would make a huge difference. He didn’t want his parents to bear all the burden of putting him and his sister through school, not if he could help it.

He pulled on a faded Flyers T-shirt and opened his door, almost tripping over the ball of fluff waiting right outside. “Dammit, Biscuit!” He received a put-upon meow in return as he scooped the cat up in his arms. Biscuit’s rumbling purr was comforting against his chest as he carried him down the stairs. The cat started to squirm as soon as they got to the kitchen, ready to get at the food waiting in his dish.

Ben absently brushed cat hair off his shirt before sitting at the table in front of a plate piled high with eggs, bacon, and fruit. He was just in time because his dad and sister had almost finished their own breakfasts and were already eyeballing his. It was a cheat day, for god’s sake, but they were all vicious when it came to bacon. “Morning.”

Not quite sociable yet, his dad answered with a grunt. He’d be better after his second cup of coffee.

His mom swooped by and ruffled his hair. “You have ten minutes.” Ben ran a hand through his already messy hair and groaned. She narrowed her eyes. “Get a move on.”

He took her at her word and dug in. After he finished, he slurped down coffee and juice and took the extra precaution of downing a glass of water. It was already warm outside, even for August, and it’d be a long sweaty day.

“When do you think we’ll be getting home?” He’d promised Ryan he would go to a party with him tonight. It was a promise that only a best friend could drag out of him. Ben didn’t like parties for the most part, especially ones where there was drinking and other stuff. He knew it made him look like a goody-goody or a stick-in-the-mud or whatever other term Ryan could dream up to tease him with, but he didn’t like to take any chances. He couldn’t put his future in danger, as dramatic as that sounded in his own head.

His mom was digging through her purse for her keys. He let her look for a few seconds before reaching over and plucking them off the hook. She took them with a lopsided smile. “Sorry, what did you say?”

Ben rolled his eyes with a grin. She knew his practice schedule better than he did, but could never keep up with her keys. “What time do you think we’ll be back?”

“Why? Got a hot date or something?”

Ben grimaced behind her back. There was a lot she didn’t know about him, especially in that respect. He opened the front door and gestured for her to go ahead.

“Nah. Ryan talked me into going to a thing at someone’s house. Holtsy’s girlfriend’s?” He didn’t think she’d have a problem with him going to a party, but he didn’t want to have to answer a lot of questions. Plus, she loved Ryan.

She gave him an odd look before unlocking the car. She knew he didn’t like parties. “We should be back in plenty of time. You want to drive there or back?”

He’d had his driver’s license for only two weeks and was still nervous behind the wheel. It hadn’t helped that he’d put off learning how to drive until this summer, right before his senior year. The only reason he finally relented was because he’d be off to college soon, and his dad pointed out they wouldn’t be there to drive him to practice or class. So Ben had sucked it up and decided to learn. Driving still scared the hell out of him, though.

“Back.” The traffic would be lighter at least.

“All right.” They had a brief squabble over the radio that his mom won, before heading out. It was just the two of them, as Beth would be coming later with their dad after running some errands. “But no trying to get out of it this time.”

Ben shook his head and smiled out the window. “I won’t.”

Jennifer has always been a voracious reader and a well-established geek from an early age. She loves comics, movies, and anything that tells a compelling story.

When not writing, she likes knitting, dissecting/arguing about movies with her husband, and enjoying the general chaos that comes with having kids.