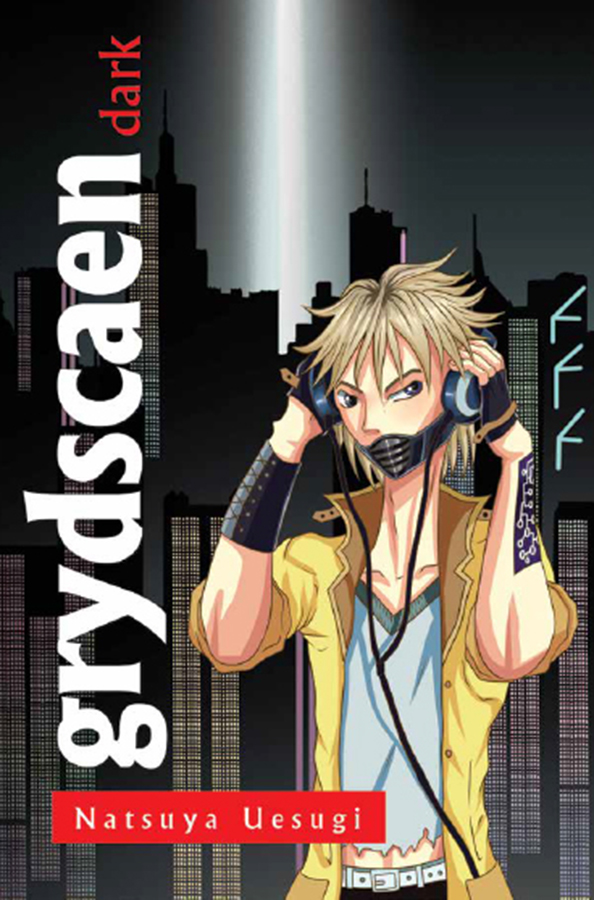 Series: grydscaen #8. grydscaen: dark is a backstory book which features the hackers in the series. It's not necessary to read the previous books in the series, but it doesn't hurt.

Warnings: hackers infiltrating the stock market, hackers against the government

A clandestine meet occurs in the Echelons under cover of darkness where Top Secret intel on the stock market changes hands. The insider tip gets the gothic hacker Jester engaged in a high tech game. Parliament votes to lower harsh stock market regulations fueling the Corporation's bottom line, a payoff from ministers who were propped up by illegal corporate campaign donations. Ordered by Jester, the teenage hacker Rom infiltrates the largest high volume brokerage house causing wild gyrations in trading. When Jester triggers an insidious stock market payload, all hell breaks loose threatening the pristine City. Will Zoon, the leader of the Triumvirate, get roped into the fray? Can Raven, the government hacker, put the cryptic clues together before the market crashes? Find out in grydscaen:dark. Whose side are you on?

Lino just wanted peace. All he got was war.

In the year After Colony 2055 there was the Great War. SenseNet government scientists harnessed their knowledge of nuclear weapons and created a new form of energy. This kedek energy was a natural found occurrence that existed in pools far inside the planet.

Harnessing this energy into weapons called kedek bombs, scientists warned these weapons were unsafe and should never be used.

The draconian Atlantea Federation conquered more than half of the world’s territories. A group of islands and nation states formed the Pacific Territories and in a single brave act retaliated in a battle known as the Blood Red Incident. The Atlantea Federation responded with wrath releasing the kedek-based Dionysis Effect nuclear bomb stolen from the SenseNet. The untested weapon’s radioactive fallout created Codess which manifested as psychic powers.

Pacific Territories’ society was segregated into citizens and non-citizens. Only citizens could reside in the pristine City. Non-citizens were left with poverty and strife in the Zone where the bomb had gone off, or in the Echelons with the Red Light District, drugs, and crime.

A group of hackers rose up to combat government oppression and injustice by the Zone Police. Enforcement squads rounded up psychics nightly taking them to work camps in the toxic kedek mines. The Terror Hack used guerrilla warfare to fight the Elite government. The Packrats, a cyber terrorist organization vowed to regain control and free society through cyber revolution. Run by the elite hacker Faid Callen, he created the Packrat Sprawl and set up the Runners, Wastes, Acolytes, Hosts, Prophets and Mobile Command. Each faction possessed deadly skills and laws in the Packrat Code that ruled their actions. Civil war ripped at the heart of society.

The son of the Viceroy, Lino Dejarre had psychic power. All he wanted was peace. He joined the Psi Faction as a clandestine psychic operative and was tasked to capture Faid Callen and quell the violence. When the Atlantea Federation attacked the City, Lino found himself once more answering the royal edict and forced to become Sub Viceroy and rule as war raged around him.

Separated at age nine and banished from the royal family, Riuho Dejarre’s hatred for Lino grew as he tried to scrape out a life in the slum level Echelons while Lino lived in the pristine City. Stripped of his citizenship, Riuho vowed he would get revenge and did everything in his power to thwart Lino’s every move. From his first encounter with the Atlantea Federation, Riuho found his place and the resources to get what he desired.

The Atlantea Federation attacked brutally on the ground and also threatened the Pacific Territories’ space colonies. Lino and his Psi Faction team were roped into global diplomacy, inter-colony politics, covert missions, battleships, and space battles where they encounter the Atlantea Federation head on. When Riuho once more enters the fray, the high stakes game threatens to destroy everything for which Lino has worked.

Intrigue, psychic powers, clandestine operations, treaties, politics and a hacker revolution. From space battles, to kidnappings and assassinations, and battleships off the coast, grydscaen is filled with in depth characters and richly detailed storylines that peak your interest and keep you coming back for more.

“Not here. Hide the data till we are off the street. This way,” Toapfyl hurriedly motioned to the data messenger in the blue military coat, dark cargo pants and combat boots who followed him off the sidewalk and down another alley. He was wearing the typical garb for a data messenger which made Toapfyl comfortable when he met the stranger in the alley leaning against the wall, easily identifiable.

Toapfyl, a Level 3 hacker, was wearing maroon jeans and a zippered black hoodie pulled over his ebony half shaved head, exposing a slap of dirty brown dreadlocks gathered in a ponytail at his forehead hiding his right eye.

A prostitute wearing a pink miniskirt and fishnet stockings kissed a businessman in a black suit under a sickly yellow streetlight. Toapfyl and the data messenger were once again shrouded in shadow by the derelict buildings as they passed leaving the two to their pleasure.

Toapfyl pushed in a dilapidated door at the end of the alley, grime from the street creating a dusty haze in the air leaving a putrid stink. They entered a staircase. There was no light as they descended. Toapfyl sparked up his aegis to his hand, the manifestation of his psychic power, and lit a path to the basement.

He pushed in the door onto a dimly lit room and revealed Jester, the leader of the Jester hacker guild sitting in a rickety folding chair in the center of the empty room smoking a cigarette from a long black holder. A soft haze filtered over him from a light fixture dangling precariously from ceiling wires, the glass cover filled with dead moths that had happened their way inside and lived out their final days circling the artificial sun. The wan flickering light cast shadows that danced at the corners, the bulb swinging back and forth, moved by the basement door opening.

embroidered crimson roses, He sported an elaborate olive short coat with a high collar and dark cuffs and epaulets. A monocle optical sensor over his right eye, he was wearing a green top hat with a scarlet rose perched at the brim. His pink straight, shoulder length hair shined in the light.

He made an irritated gesture with his hand. “Don’t keep me waiting. Where is it?” Jester took a long drag from the cigarette and blew out a puff of smoke. He waved as Toapfyl closed the door.

“Not until I get paid.” The shocked data messenger prompted pulling out a red etched credit sized data card shaking it.

“Do the needful,” ordered Jester raising an eyebrow. He turned his back to them as he continued to smoke his cigarette taking a long drag.

Toapfyl pulled a platinum credit card out of his back pocket. The data messenger pulled his. They locked the two cards at the long end, pins embedded in the technology. Toapfyl typed out the amount of 55,000 credits on the virtual keyboard appearing on the face of his card. The cards chimed signaling the encryption key matched and the credits transferred from Toapfyl’s account.

The data messenger released his card and ran it through a handheld confirming the amount. He nodded stashing the handheld in his chest pocket.

Jester turned back around not witnessing the exchange purposefully and stuck out his hand with his black lacquered fingernails in the knitted fingerless gloves. The stitching was coming apart at the seams on the thumb and index finger, the gloves covered in little white pills. Where everything about Jester’s appearance was immaculate, the gloves gave away an underlying confusion or sloppy disregard for his perfect veneer.

Jester was one of the hacker guild leaders who almost never showed his face in public. It was well known that Jester did not make meetings with data messengers or low level hackers, like a Level 3. He couldn’t be bothered with them. The fact that the data

messenger insisted, and that Toapfyl made it happen, kept the data messenger on guard. He placed the red card in Jester’s palm and turned to leave.

Toapfyl jerked raising a gun to the data messenger’s temple. He touched skin. “No one leaves until the data is confirmed.”

Rom, the teenage Level 9 hacker, emerged from the shadows behind Jester. Eyebrow raised, he was annoyed with Toapfyl. Rom pulled a handheld out of his tan trench coat as he came into the dim light. His dull blonde unkempt hair gleamed with a blue streak at the front. He took the data card from Jester and swiped it in the port on the handheld reading the file as the system ran the security check. He typed on the deck triggering an encryption key prompt as the handheld’s computerized female voice spoke the request.

“The data is encrypted? Why didn’t you mention that?” questioned Toapfyl suspicious. He pushed the gun barrel closer taking a step in and made the data messenger move his head back.

“No problem,” interrupted Rom. “Most data messengers are Packrat Runners smuggling data from the City into the Echelons. It should take a Packrat decrypt key. I have access to the Packrats’ archive of one-time, pre-shared obscure keys. What I need for this, right?”

“That is why I wanted Jester at the meet. Toapfyl, all data messengers use encryption. If you don’t know that, you are an idiot. No self-respecting hacker attached to Jester would even ask the question you did just now. Only a Level 9 can penetrate. Jester would know a Level 9. Rom is one of the best in the business,” the data messenger revealed his disgust with Toapfyl and yanked the gun out of his hand pointing it back at the hacker.

Toapfyl blanched confused how he had been disarmed and lowered his eyebrows at the disrespect. Rom shot him an angry glare silencing him.

Jester smirked giving Rom permission to engage and waved the data messenger off. The messenger lowered the gun handing it back to Toapfyl.

Toapfyl opened the basement door and motioned the data messenger out accompanying him up the stairs leaving Jester in the room with Rom. 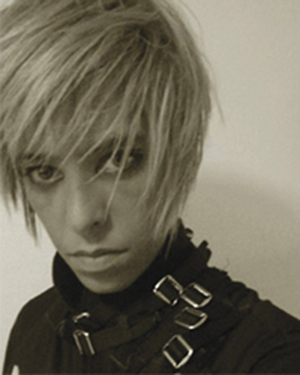 Natsuya Uesugi is a systems analyst and ethical hacker by day and a manga artist and a writer by night. With an MBA in International Management and a minor in Japanese, Natsuya insists on showcasing diversity in his writing using his Japanese, Native American and African American heritage.

He studied animation and game design in art school and has published the grydscaen manga "A Storm's Coming" which features the LGBT teen Rom from "grydscaen: dark," and two manga in the yaoi series "graphic noiz." Two episodes of the short anime "A Storm's Coming" is available with a third episode planned. Four counseling centers are currently using the "A Storm's Coming" novelette to help LGBT homeless youth and troubled teens with self esteem.

He is author of the dystopian cyberpunk "grydscaen" series, the dark fantasy trilogy ""The Seer of Grace and Fire," and the yaoi novels and manga "graphic noiz." He enjoys skydiving, cosplay, watching anime in Japanese, watching French news, World Cub futbol, eating ramen and anything with matcha, and writing poetry.

Natsuya is giving away eBook copies of two of his other works — grydscaen: tribute and A Storm's Coming one shot manga — with this tour.