At this year’s Webcon, nothing will stay secret for long. 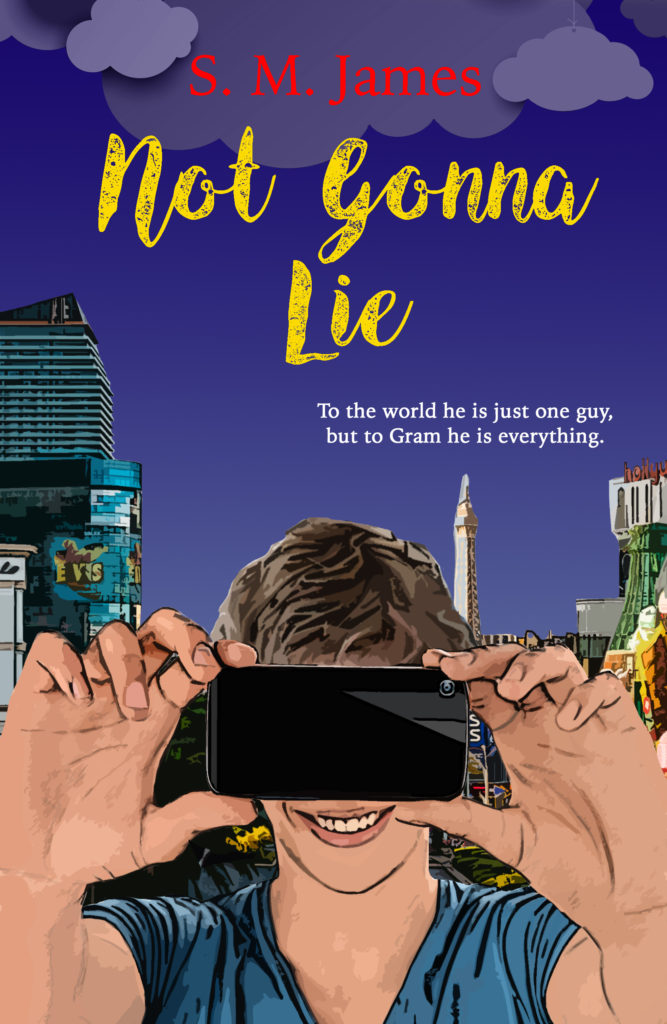 Buy it: Amazon US | Amazon UK | Amazon AU — or available to borrow on Kindle Unlimited

Note: Not Gonna Lie is a standalone story within the #lovehim series.  There’s also the novella prequel (To Be Continued, book #6). It will show you where it all began for Gram and Digi!

Everyone has their secrets.

Last year Digi walked out on Webcon, on his fans, and on Gram.

Now he’s back determined to give what they had a real shot, but Gram is more prickly than ever, not willing to risk his heart again.

Despite trying to stay out of the spotlight, the anonymous Public Service Announcements draw Digi back in. As the secrets of the internet’s top celebrities are leaked to the world, it’s only a matter of time before Digi and Gram are next.

To get through it, they have to set their rivalry aside.

Will Digi handle the pressure of the bright lights long enough to find who is tearing their world apart? Or will the threat of full exposure be too much for him to handle?

Oh, I really enjoyed this. I loved Digi and Gram in their prequel novella, To Be Continued, and with the way they left things, I was honestly worried that this novel was going to be uber hatey.

Thankfully, that's not what I got. What I got instead was Gram trying to stick to his guns of attempting to get over Digi, and Digi being honest and adorable and endearing to the point where he shoots past all of Gram's defences.

Gram and Digi were two fully-fleshed out characters with real fears and desires, and their journey to their happily-ever-after isn't an easy one throughout the book: fame, an eating disorder, anxiety, and spilled secrets threaten to get between them. But at the end of the day, they're there for each other, which includes making hard decisions the other might not like. I loved how Gram made the toughest decision of all at Digi's low point; he really came through for Digi even though he knew it might cost him their relationship. I can't fault S.M. James's character development; both Gram and Digi changed and became better people through the course of the book, for themselves and for each other.

I adored Gram and Digi together; they were simply adorable in their own messed up, teenage ways and their chemistry jumped off the page. I look forward to them possibly having cameos in future books!

Gram tosses his cell phone onto the bed between us. Playing along, I grab his phone and check the screen, and the selfie we took last night stares back at me. I smile, we both look relaxed and totally comfortable, even though my hand on his thigh had me buzzed in that exact moment.

I set my mug down and toss the phone back to Gram before rolling onto my side. “Reminds me of when we used to vlog together.”

He stares at the photo for a minute. “Yeah. It does. Did you see the comments?”

“Turns out, people are still insanely curious about where you’ve been for the last year.”

“Because you disappeared, Digi. You were one of the biggest vloggers and then you were gone. All those comments are asking about you. So … let’s collab.”

“Well we’re friends, aren’t we? I haven’t lined up any guest vloggers yet, and if you do this with me, I won’t have to.”

“I’m not saying you have to go back to it, but this will give you a chance to tell your piece, then everyone will stop speculating and you can go back to whatever the bloody hell you’ve been doing.”

I scrunch up my face, not real interested in the idea. “I dunno, Gram. I like being able to come here and not be hassled. If I do that, I’m opening the door on everyone thinking they can stick their noses back into my life.”

He sighs. “I can’t say I don’t understand. And it isyour choice though.” Gram watches me, completely unguarded for a change. There’s no tension in his face, and it’s the way I like him best.

“Hey, remember that time we snuck off while our mom’s were on a panel, and went to that dolphin place?”

“Oh yeah …” His gaze goes unfocused and I know he’s remembering that day. “Yeah, that was amazing.”

It was. We’d spent the whole day there, participating in the training sessions and swimming around. Gram hadn’t started dying his hair at that point, and I can still picture the way he kept pushing his black bangs back off his face.

His gaze flicks to me and away again. “Why are you looking at me like that?”

I blink, noting how wide my smile stretches. “I just felt real close to you that day.”

“Probably because you kept hugging me.”

“I think that’s when we first really became friends.”

“When I first realized I’d never be rid of you.” He pretends to cringe, but doesn’t do enough to cover the affectionate tone.

“When I first realized I never wantedto be rid of you,” I counter, knowing he won’t expect it.

He sighs. “You just say whatever is on your mind, don’t you?”

“Sometimes. Unlike you. You neversay what’s on your mind.”

“I do when it’s important.”

“So tell me what you’re thinking now.”

The smile drops from my face as I glance at the time. “You don’t have to go yet.”

“You know my schedule, do you?”

“I just … I mean, you can hang out for a bit longer if you wanna. We can order breakfast up here. You won’t have to worry about fans interrupting that way.” I’m just throwing out words at this point, but his schedule doesn’t start for another two hours and he’s clearly ready. There’s no reason he hasto race off, right?

“I thought you were tired,” he says.

He’s frowning at the bed and it takes him a bit to answer, like he’s trying to come up with an excuse to go. “I told my mother I’d eat with her …”

“You get to see her any old time. We’re only here for twomore days, Gram. Would you really deny me your company?”

He laughs despite clearly trying to hold it back, and shoves my shoulder. “Okay, fine. Just stop.”

I shrug, sitting up so I’m facing him. “What can I say? I like attention.”

Gram frowns, wide mouth falling into a pout. “If I didn’t know better, I’d think you were flirting with me, Digi Lynch.”

I blink, eyebrows pulling up. Flirting with him? Am I? I replay my words over, and actually, I think I might be. Huh. “Would that be a bad thing?”

“It would be a strangething.” He’s still looking at me odd, so I leave him to be confused and pick up the room phone to order our breakfast.

Gram settles back against the pillows, long legs stretched over the bed and crossed at the ankles. He’s not too much shorter than I am, but he seems smaller. Maybe it’s the over excitable personality he puts on for his vlogs, or the way his delicate face scrunches when he’s trying to be mean. I could scoop him up easily, like I did when we took that photo, and I’m hit with the impulse to do it again.

I grin as I imagine how surprised he’d be if I just grabbed him and pulled him close. I dunno want I’d do when I got him there—hug him for sure, but maybe … maybe he’d let me kiss him again?

“I’m sorry for shaving your eyebrows off,” he says suddenly, glancing over at me.

“Gram that was two years ago.”

“But I didn’t apologize.”

“They’ve never grown back properly though, have they?”

I rub a hand over my eyebrows. “They’re a bit of a mess.”

“They make you look permanently bewildered.”

I laugh, lying on my side so I’m facing him. “To be fair, I feel like I don’t know much of what’s going on anyway.”

“I’ll take that as a compliment.”

Gram screws his mouth up to the side, but his eyes light up, and it’s all I need to know that he’s definitely flirting with me too.

Check out the amazing character art of Gram and Digi below! 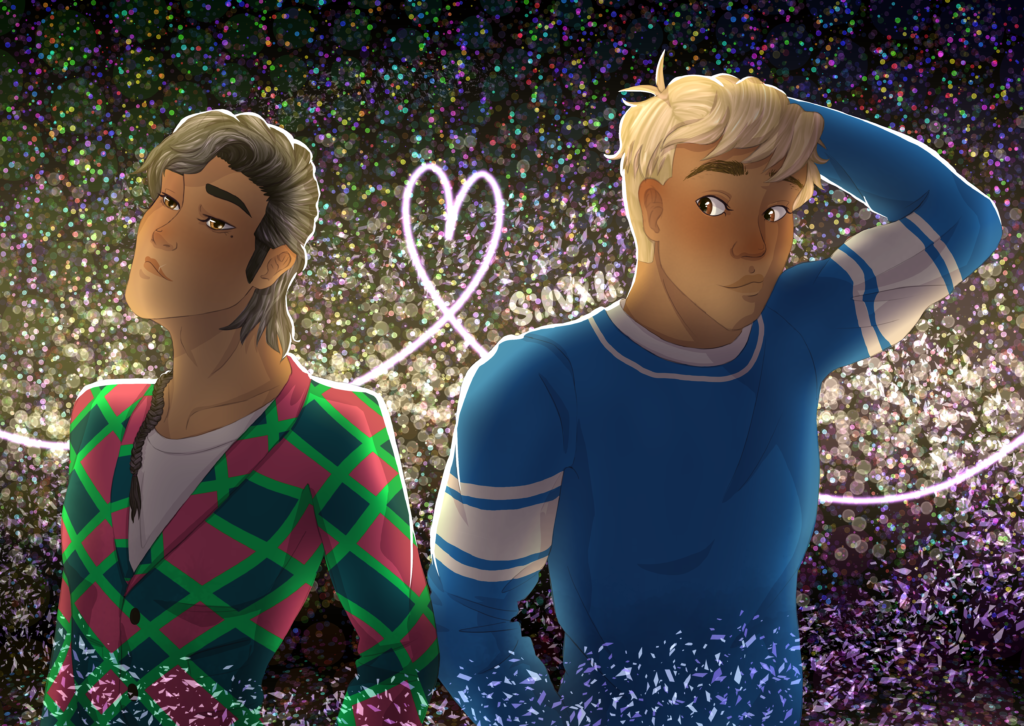 While not writing, SM is a readaholic and Netflix addict who regularly lives on a sustainable diet of chocolate and coffee. ​

Enter the Rafflecopter Giveaway for a chance to win one of these prizes: