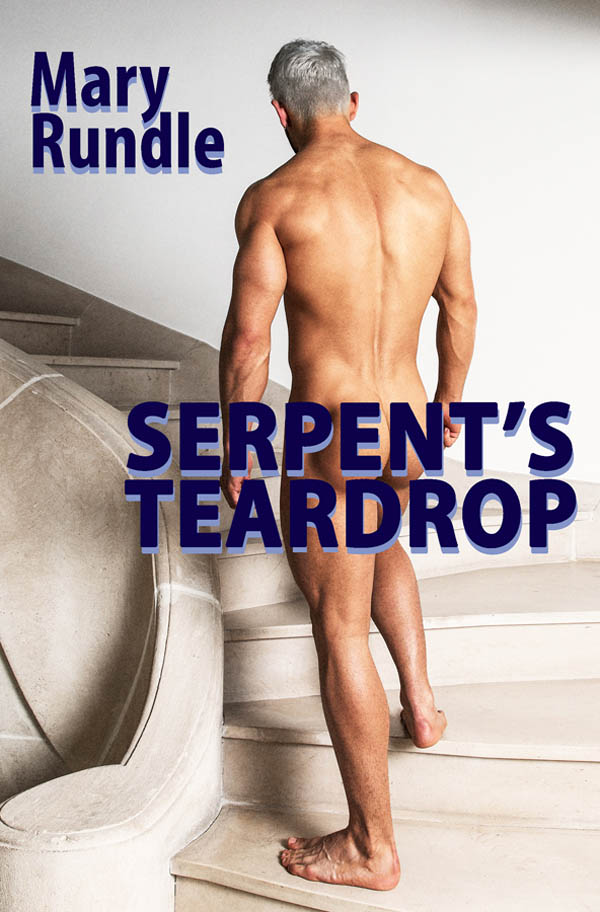 This is part of an on-going series by Amazon Bestselling Author, Mary Rundle, and catching up on previous titles is advised. Readers of the past books will enjoy meeting old friends once more as the pack does what it does best ̶ caring for one another and helping shifters everywhere.

Brian, a.k.a. “The Loch Ness Monster” has searched for his Fated Mate in vain for more than 600 years until he scents Reif in the frigid waters of the lake. But his mate seems to be purposely eluding him, so Brian turns to the Shaman of the Blackwood Pack to help find him.

Reif, one of a line of ancient shifters thought to be extinct is drawn to Brian but must focus on completing a mission to free his enslaved people from the clutches of an evil group. Despite his powerful attraction to Brian, he hides from him, believing it’s the only choice he has.

That changes when Reif surreptitiously kisses Brian while he’s sleeping, setting off a chain of events that puts both of them in mortal danger, and the powerful Blackwood pack resolves to help them stave off the wrath of vampires and witches.

Along the way, both Brian and Reif learn some hard lessons about the mutual trust necessary to achieve the happiness and fulfillment both have sought for hundreds of years.

A heartbreaking confession, an action-packed rescue, a riveting courtroom battle and many unexpected twists and turns make this passionate love story by Mary Rundle impossible to put down once you’ve read the first page.

Join the journey of the Blackwood Pack, seven brothers who are gay wolf shifters in search of their fated mates – stories about love at first sight with twists and turns, angst and humor, romance and adventure. Each book has two main characters who meet, fall in love, mate and achieve an HEA but the stories also chronicle the continuing saga of the Blackwood Pack. The series is best appreciated by reading the books in order. 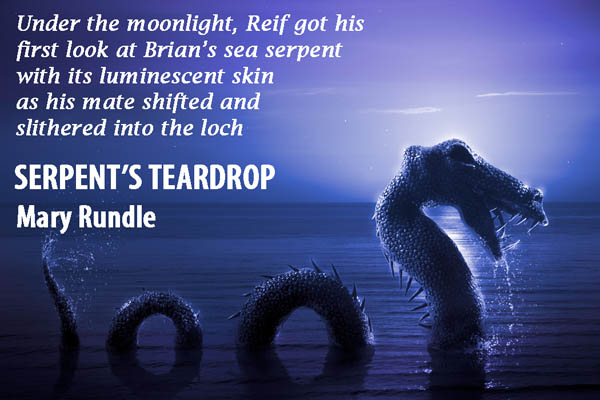 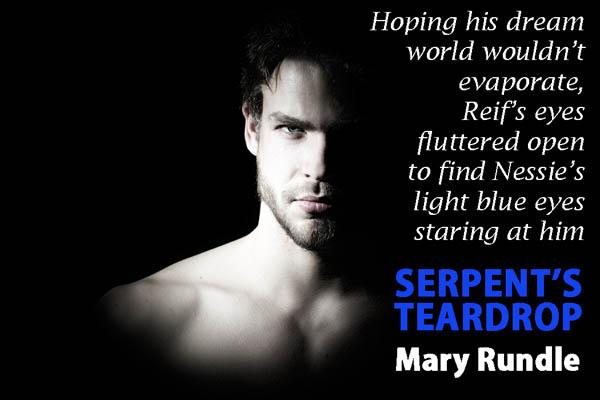 After brunch was over, Logan asked, “Brian, what can we do for you?”

“Macushla! Not here. C’mon everyone, let’s talk in the living room,” Kieran said, as he got up. “There’s a lot to discuss.”

Brian chuckled to himself as everyone quickly rose and followed the Shaman; no matter how big these wolves were, it was apparent they weren’t going to disagree with him. Taking a seat near Logan, Brian waited until he received a nod before beginning. “I have an intruder in my loch and I need help findin’ it. I have been lookin’ for him since I scented him the day I took the laddies out on my boat, but canna find him.”

“Because I dinna know what the intruder is,” Brian answered. “Only that it can shift so it can dive deep to the bottom of the loch and then shift back when it’s on land.”

“Do you know what form it has in the water?” asked Slate.

“What about when it’s on land?” asked Zane.

“Naw…I can only find the place where it leaves the water because its scent ends there,” Brian said.

“Does it have the same scent on land as in the water?” asked Colton.

“I dinna know. There’s nae a scent on land…at least none that I found,” Brian said.

“Huh! Have you seen it when it’s on land?” asked Kieran.

“Naw, Shaman, I’ve never seen it on land. I can feel its presence but nae anythin’ else,” Brian replied. “I think he becomes invisible on land.”

“Maybe it has an anti-scent spell like we do,” suggested Zane.

“What spell are you talking about, lover? You smell pretty good to me,” David said with a smile.

“Are you sure? I mean Mystia put one on each of us so our uncle and his goons wouldn’t be able to find us,” said Zane.

“David can smell you,” Kieran said, “because the gods made sure he couldn’t be affected by anything, including witches’ spells, which is why Mystia’s anti-scent spell doesn’t work on him. Your scent is still hidden from everyone else, unless you had her remove it.”

“Good to know that, babe,” Zane grinned at his mate. “One less thing to worry about.”

“So why doesn’t the intruder have a scent? Could it have a spell preventing Brian from picking it up?” asked Dakota.

Pausing a moment to listen to his spirit, Kieran answered, “No, there isn’t a spell but my spirit doesn’t know what’s concealing it.”

“What about footprints? Did you find any at the location where it left the loch?” asked Slate.

Shaking his head in frustration, Brian said, “Naw, nae a one. I dinna know how that can happen.”

Laying a hand on Brian, Kieran sent him some love as he asked, “Why don’t you tell us everything starting with the day you took me and my friends out on the loch?”

Recalling that day, Brian’s cock hardened instantly at the memory of the delicious scent washing over his body as he floated on his back in the loch. Now, squirming in his seat, hoping to hide his erection, Brian groaned inwardly, closing his eyes, finally accepting what he’d been denying all along—the intruder was his Fated Mate. How can that be? I’m too auld to have one.

“Brian? Are you all right?” asked David.

Kieran caught Brian’s eye. “I already know about it. Will that make it easier for you to tell us.”

“Yes, my spirit told me,” replied Kieran. “So go ahead, I promise we’ll help you find him.”

Relieved to know that much at least, Brian began, “I was doing a back float when a passing boat’s wake carryin’ my mate’s scent washed over me. Shifting, I dove down, searching for it, but twas weak and quickly dissipated. That night, I searched again and the scent was stronger, but as I followed it, I realized twas at least an hour old. It led to the shoreline, where I shifted and climbed onto the bank, but there was nae a trace—even though I felt its presence.

“Every night, the same thing happened, even though I went into the water at different times—sometimes early, other times later, but twas always the same... except for last night,” Brian said. “After cruising the loch, I waited until the sky turned pink before I shifted and climbed aboard my boat. As I headed below, I felt someone watching me and I sensed my mate was somewhere near the marina’s buildings, but still I could nae see him.” Brian was getting agitated by this time, prompting Kieran to lay a calming hand on him. After a few moments of silence, the sea serpent continued.

“I decided to search the area lookin’ for a clue to help me figure out who he was, but could nae find anything. I know he was close by, because I again could feel his stare and sensed his presence,” Brian said, his frustration now evident. “Please Shaman, I need yer help. I dinna know why my mate is hidin’ from me, but I feel something is amiss and he needs me.”

“Of course we’ll help you won’t we, macushla?” Kieran asked, glancing at his mate.

“My mate’s right, Brian,” answered Logan. “Our Alpha regards you as a member of the Blackwood Pack so whatever needs to be done, we’ll do.”

After hearing a chorus of ‘absolutelys’ and ‘count-me-ins’, Brian felt his sea serpent relax, confident his mate would soon be found. “Thank ye, thank ye, I canna tell ye how much I appreciate it,” Brian said, with a sigh of relief.

Now, six books later, Ghost Walker, another Best Seller, has just been released to critical acclaim. I love the M/M paranormal genre because it gives my imagination a lot of territory in which to roam. My mind can really run wild and come up with some amazing stuff when it doesn’t have to stay inside the box.

I currently live in the Northeast and love the beautiful change of seasons, my husband, and our quirky calico cat, though not necessarily in that order. I’m always happy to hear from my readers and can be reached through Facebook, Twitter, MeWe, or my website.

Mary is giving away a $20 Amazon gift card with this tour. Enter via Rafflecopter:

Release Blitz & Giveaway: The Mage on the Hill by Angel Martinez