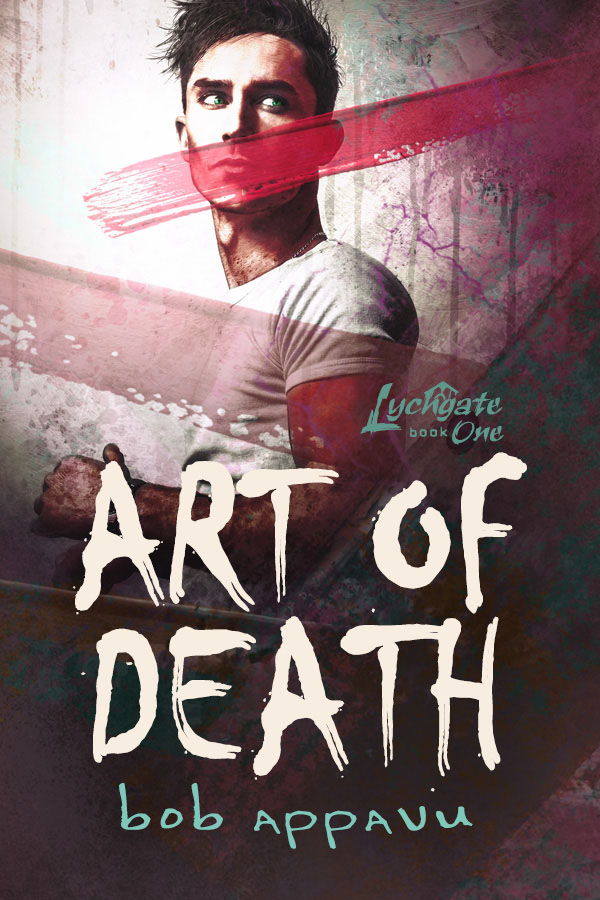 Title: The Art of Death

Starving artist Riley Burke refuses to be dependent on his rich older boyfriend—hence his second job as a nude model at the local art school. When the famous artist Coliaro requests him for a private modeling session, he jumps at the chance to earn some real cash.

But then Westwood, a mysterious stranger, warns him to steer clear—it's said Coliaro is undead. That his worshippers perform rituals to fill him with life energy. That every time he paints a male nude, the painting transforms to depict a gruesome murder. And that shortly after, a young man turns up dead.

Riley dismisses the rumors—until they start to play out before his eyes. When he becomes a target, Westwood comes to his aid. But Westwood is secretive and dangerous himself... which just makes him more attractive to Riley. Riley is in over his head, and even his tenuous alliance with Westwood might not save him.

Note: This title was originally published under an alternate pen name. This second edition has been re-edited and significantly updated.

A young artist's life changes forever when he stumbles upon the secret society of the undead... and those who defend humanity from the depravity of their brethren. Lychgate protects the innocent from the monsters stalking the shadows, and Riley and his undead lover, Westwood, must fight together or lose each other. 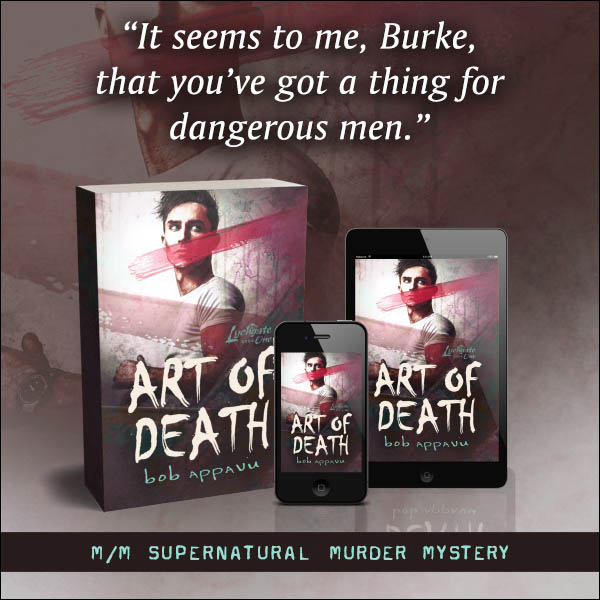 Upon reaching Nick’s house, Riley turned off his headlights, eased into the driveway, and parked outside the garage. He’d been racked with guilt throughout the drive, unable to think about anything but the future murder he’d failed to prevent. He tried to tell himself that maybe he’d at least saved Levi from a trip to Coliaro’s bedroom, but it was no consolation.

You’re wallowing, he told himself as he sat, stalling, with his hands on the wheel. He gave his head a brisk shake to break the string of invasive thoughts.

But shutting down his thoughts didn’t mean he’d ceased to believe them. As he climbed out of his car, he felt crushed by the weight of the guilt he couldn’t ignore.

He’d leave his car in the driveway. He didn’t want to wake Nick with the squealing of the garage door. After sliding out of the car, he gently pushed the driver’s side door shut and turned toward the house.

Westwood stood at the hood of the Corolla, his face hidden in shadow. Riley cried out and stumbled back against the side of the car. “Shit, Westwood!”

Westwood didn’t speak. Riley waited for his heartbeat to return to a normal pace, and Westwood continued to stand without offering any explanation.

“What are you doing here?” Riley asked at last, his voice hushed. “My boyfriend is inside.”

Westwood hesitated. Then, softly, he whispered, “I had to make sure.”

“What are you talking about?”

“Coliaro told me he was going to… do things to you. Did he?”

“He didn’t do anything.” Riley crossed his arms over his chest. “Why do you care? After our phone conversation, I was under the impression you were pissed at me.”

“I am. You were an idiot going after Coliaro like that. But that doesn’t mean I want you maimed or tortured. I’ve known Coliaro for a long time, and he doesn’t make empty threats.”

Riley looked past Westwood toward the house. The curtains were drawn over all the windows, and he couldn’t tell if Nick had waited up for him. “Listen, I just want to go to sleep.”

Westwood reached out without warning, tilting Riley’s chin back. His eyes appeared oddly reflective in the dark as he examined Riley’s neck. His gaze traveled down, pausing on Riley’s wrists. Riley pulled back, bracing himself against his car. “It’s only a couple rope burns on my wrists and a few scratches from falling into the bushes. No big deal.”

Riley had a feeling he would have been more convincing if his voice hadn’t cracked on the last few words. Westwood narrowed his eyes, and Riley felt himself begin to tremble. He’d been so trapped in his guilt that he hadn’t realized how shaken he was. Now, in front of Westwood, was not the time he’d wanted to make that discovery. Swiftly he turned away, cursing under his breath as his tremors intensified.

He could feel Westwood’s gaze on him, scrutinizing him. “I’m tired,” Riley told him, his voice choked. “That’s all.”

A warm hand on his back snapped him into awareness. His muscles went rigid and he turned, meeting Westwood’s eyes. Westwood ran his hand slowly up and down Riley’s spine, easing his tremors. Riley shuddered, alarmed at the potency of Westwood’s touch and dismayed by how badly he wanted more.

He reveled in the warmth of Westwood’s soft caress, closing his eyes and breathing in deep. This was exactly what he needed—a calm, reassuring hand.

Westwood could barely stand to keep his hand on Riley. Riley’s tormented energy crackled under his fingers like static electricity, shooting through his veins and jolting him to his core.

Riley had fooled him. He’d stepped out of his car wearing a shell so stoic and emotionless he could have passed for undead. But the moment Westwood had touched him, his ruse collapsed. Riley had been concealing a hurricane of emotion just below the surface, and with a single touch, it flooded the dams.

Riley’s emotion poured into Westwood. It filled his heart, shooting upward and tightening his throat, sparking wetness behind his eyes. He blinked, and a tear fell from his eye. Not his own tear—the tear Riley refused to shed.

Shit, this was painful. He couldn’t bear it. But if he let go….

If he let go, then Riley would have to face the hurricane alone again. Right now, Westwood’s touch seemed to be the only thing calming the storm. He couldn’t withdraw.

Bracing himself, he blinked out another of Riley’s tears and tightened his grip.

Riley didn’t want Westwood to let go—ever. Westwood’s touch calmed his heart in a way he hadn’t felt in years.

Why? How? This was Westwood, the same man who barely had a grasp on empathy or emotion. Yet he was somehow capable of freeing Riley from the prison of his stress and panic. Riley wanted to say something to him, but he had no idea what to say.

After a long, shaky pause, he opened his mouth to speak, and Westwood immediately withdrew, as if assuming Riley was about to protest. Westwood took a couple of steps back, giving Riley space, and Riley almost groaned with disappointment. More than anything, he wanted that hand on him again. He wanted that surprisingly gentle touch.

Westwood lingered. If Riley didn’t know better, he would have thought Westwood didn’t want to leave him alone. When Westwood finally spoke, it seemed to take him considerable effort. “I only came to make sure you made it home alive,” he said gruffly. “Go inside and sleep.”

Riley considered calling back to him, asking him to stay awhile. But by the time he managed to find his voice, Westwood had already disappeared into the shadows.

Bob Appavu is an author, illustrator, and creator of the long-running LGBTQ+ webcomic Demon of the Underground. Born and raised in a conservative Chicago suburb to South Indian parents, Bob turned to reading at an early age to find the inclusive, illuminating worlds that couldn’t always be accessed in real life. Bob recalls spending most of the 90s at the local bookstore feigning interest in the poetry anthologies that were conveniently shelved next to the LGBT fiction.

As a queer writer who enjoys challenging conventions and pushes creative boundaries, Bob has a passion for crafting the types of stories she can’t readily find on the shelf and the types of characters who are often denied the spotlight. Bob is a lover of suspense, speculative fiction, and deep world building, but her greatest joy is portraying the full scope of her queer characters’ humanity.

Bob is an incurable workaholic whose preferred fuel is tea. When not at work, she enjoys caring for rescued ferrets.

Bob is giving away a $10 Amazon gift card with this tour. Enter via Rafflecopter: