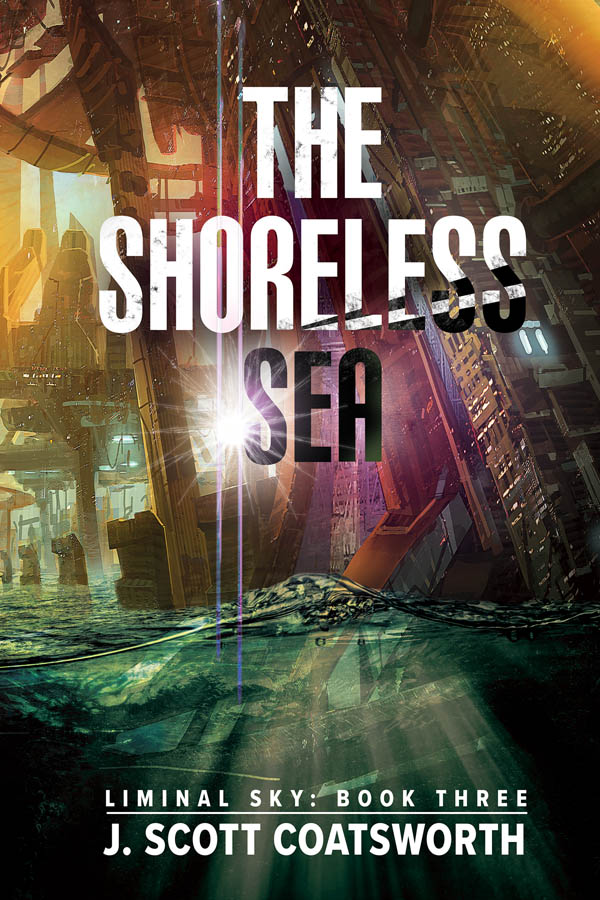 Books 1 and 2 in the series, The Stark Divide and The Rising Tide, are on sale! Get them here.

As the epic trilogy hurtles toward its conclusion, the fight for the future isn’t over yet. It could lead to a new beginning, or it might spell the end for the last vestiges of humankind.

The generation ship Forever has left Earth behind, but a piece of the old civilization lives on in the Inthworld—a virtual realm that retains memories of Earth's technological wonders and vices. A being named Lilith leads the uprising, and if she succeeds in setting its inhabitants free, they could destroy Forever.

But during the generation ship's decades-long voyage, humanity has evolved. Liminals with the ability to connect with the world mind and the Inthworld provide a glimmer of hope. They'll have to face not only Lilith’s minions, but also the mistrust of their own kind and persecution from a new government as homotypicals continue to fear what they can't understand.

The invasion must be stopped, the Inthworld must be healed, and the people of Forever must let go of their past and embrace what they’re meant to become.

Humankind is on its way to the stars, a journey that will change it forever. Each of the stories in Liminal Sky explores that future through the lens of a generation ship, where the line between science fiction and fantasy often blurs. At times both pessimistic and very hopeful, Liminal Sky thrusts you into a future few would ever have imagined. 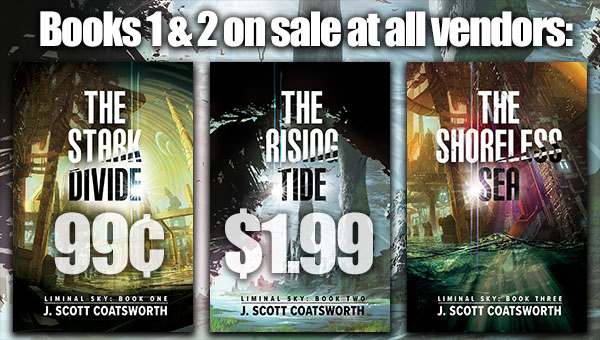 Kiryn Hammond-Clarke floated in the darkness of space, stars he’d never seen in person twinkling against the velvety black depths.

The voice came to him from out of nowhere. “Can anyone hear me?”

In his dreams, he could hear. Like when Belynn let him ride in her mind.

The voice repeated, sounding stretched and thin. “Is anyone out there?”

In the distance, a single star glowed brighter than all the others, though it was still just a small golden dot.

Kiryn reached out toward the light, his hand naked to the cold of the void.

Ice crystals formed on his arm, hardening it in place. The cold reached into his bones like knives of frozen glass. It raced up his bicep, the burning cold fire of the void.

He snatched back his arm, but he was too late. The freezing grip reached his heart, and he screamed silently—

Kiryn awoke with a start, sitting up in bed in his dorm room drenched with sweat. He ran his hands through his dark hair, letting them come to rest clasped behind his head.

First Light flashed past in the trees outside his window, brightening up the room.

The world was utterly silent.

The silence, his constant companion since birth, was particularly soothing after his rude awakening. It wrapped itself around him like a blanket, a suit of armor, a barrier between him and the hustle and bustle of the outside world.

Between him and emotion.

He held his arm out for inspection, half expecting it to be blackened by the void. Instead, it looked perfectly normal. Warm and tan, halfway between his mothers’ sepia and white skin tones.

He shivered at the memory.

The bed moved under him, and his date from the night before sat up, his mouth moving soundlessly.

The man was handsome, a Thyrean sent to the university at Micavery for his higher schooling—long limbs, blond hair shaved short, warm brown eyes.

His name was Dax. Or Zack. Or something.

Kiryn’s lipreading was decent, but he hadn’t bothered to spend too much time learning this one’s name. Dax or Zack hadn’t seemed to mind much.

Kiryn pointed at his ear and shook his head.

The man’s mouth closed, and he blushed. “Sorry. I forgot.”

That one was easy enough to read.

He grabbed the piece of cotton paper and a pencil Kiryn kept at his bedside just for that purpose and scribbled something out longhand, then handed it over to him.

It’s Dax. And are you okay?

Kiryn stared at him. Did you just read my mind? Maybe there was a little Liminal in him. He laughed, wondering not for the first time what it sounded like from the outside. It felt clunky and awkward on the inside.

He sighed and took the paper and pencil.

Dax’s hand lingered over his for an extra second before letting go.

Dax took the paper, and a grin lit up his face. His eager nod needed no translation. I work at the hatchery until six. Meet me there?

Dax slipped out of bed and pulled on his trousers and white shirt, the V-neck showing off his chest to perfection.

Kiryn sat back with his hands behind his head, admiring the view.

He leaned over, kissed Kiryn on the cheek, and mouthed, “See you.”

When Dax left, Kiryn grabbed a change of clothes and headed down the hall to the dorm bathroom. He hopped into the shower, using the aromatic red berry soap bar his mom and mamma had sent him from the Estate. The smell transported him, and he closed his eyes and imagined himself standing among the long, even rows of red berry vines that arched across the hillsides.

His parents worried about him, out here alone, but it was Andy who had insisted he go.

When Kiryn had been born congenitally and profoundly deaf, Andy and Shandra had learned sign language from the world mind in vee.

There were so few other deaf people in Forever. So few like him.

The day before he was set to leave for university, to catch the public wagon headed for Darlith and then Micavery, he’d had a huge panic attack.

His parents had sat him down along with his sister, Belynn.

“I’m scared. Why do I have to go away?” He was fidgeting, nervous.

“You have to go. There’s nothing here for you.” Andy indicated the Estate, where the family had built a thriving agricultural business on the backs of Trip’s and Colin’s earlier work.

“You’re here.” His hands signed it while his knee bounced up and down.

Andy shook her head. “This is our place. You need to go.”

He flushed. “I’m sorry. I didn’t realize I was such a burden.”

“No.” That was emphatic. “That’s not what I meant. We don’t want you to get trapped here, working on the Estate for the rest of your life. There’s a whole world out there for you to explore.” She looked up at Shandra, who nodded.

“I’ll go with him,” Belynn said and signed it at the same time, but he could hear her inside his head too.

Mom could do that, too, of course, but she had to touch him to do it.

“You’re not ready.” Shandra glared at Belynn and shook her head.

“I’ve been with Kiryn in every vee class since I was born. I’m only two years younger than he is. Let me go with him to help.”

Kiryn frowned. He wasn’t sure he wanted his little sister tagging along after him, cramping his style. If he decided to go.

Belynn’s hand found his, palm to palm, and he could feel her emotions. We can take care of each other. That thought was private, just for him, inside his head.

Andy looked at Shandra. “They could take care of each other.” She echoed Belynn’s thought and touched Shandra’s hand. Something passed between them.

Shandra looked at him and then at Belynn, uncertainty clear on her face. “We could… try it.”

“For a semester.” Andy kissed Shandra on the forehead.

Kiryn thought about it. It would be nice to have someone close by, just in case. Someone who really knew him. “Okay.” And it would be a lot less scary.

Now he was here, and Belynn wouldn’t be far behind.

Where are you, big brother? Belynn’s insistent voice.

I’ll be back in a minute. He pulled the towel from its wooden peg, dried off his hair and shoulders.

A couple of the other guys in the dorm, Stave and Trevor, waved on their way to their own showers. Cute as hell, but straighter than the old antenna on Micavery’s village green. Well, except when Stave got drunk on red berry wine….

Kiryn grinned. He pulled on his trousers and shirt and padded back to his room. Belynn was waiting for him on his bed. “How did you get in?” he signed.

They touched palms, the emotions flowing between them and synching.

“Easy. Aric at the front desk is a sucker for a pretty girl.”

She stuck out her tongue at him. “Come on. We’re going to be late.” She tugged him off the bed, and Kiryn barely had time to grab his carry sack before she had him out the door and down the hall. 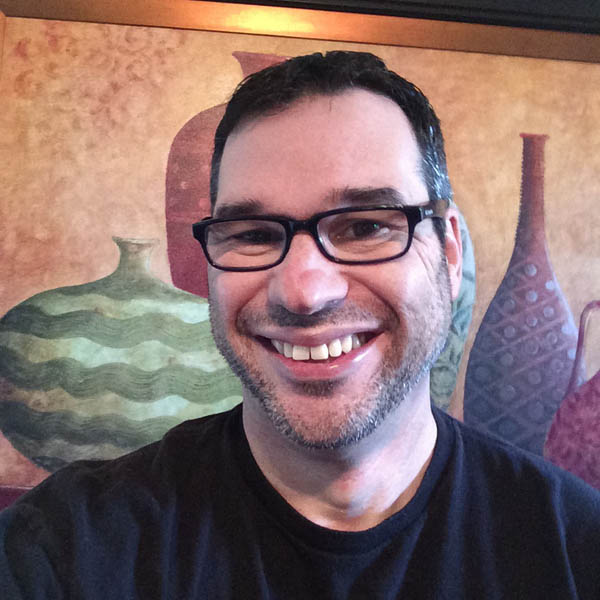 Scott lives between the here and now and the what could be. Indoctrinated into fantasy and sci fi by his mother at the tender age of nine, he devoured her library. But as he grew up, he wondered where the people like him were.

He decided it was time to create the kinds of stories he couldn’t find at Waldenbooks. If there weren’t gay characters in his favorite genres, he would remake them to his own ends.

His friends say Scott’s brain works a little differently – he sees relationships between things that others miss, and gets more done in a day than most folks manage in a week. He seeks to transform traditional sci fi, fantasy, and contemporary worlds into something unexpected.

A Rainbow Award winning author, he runs Queer Sci Fi and QueeRomance Ink with his husband Mark, sites that bring queer people together to promote and celebrate fiction reflecitng their own reality.

Scott is giving away a $25 Amazon gift card with this tour, along with three eBook sets of his Oberon Cycle trilogy. For a chance to win, enter via Rafflecopter: