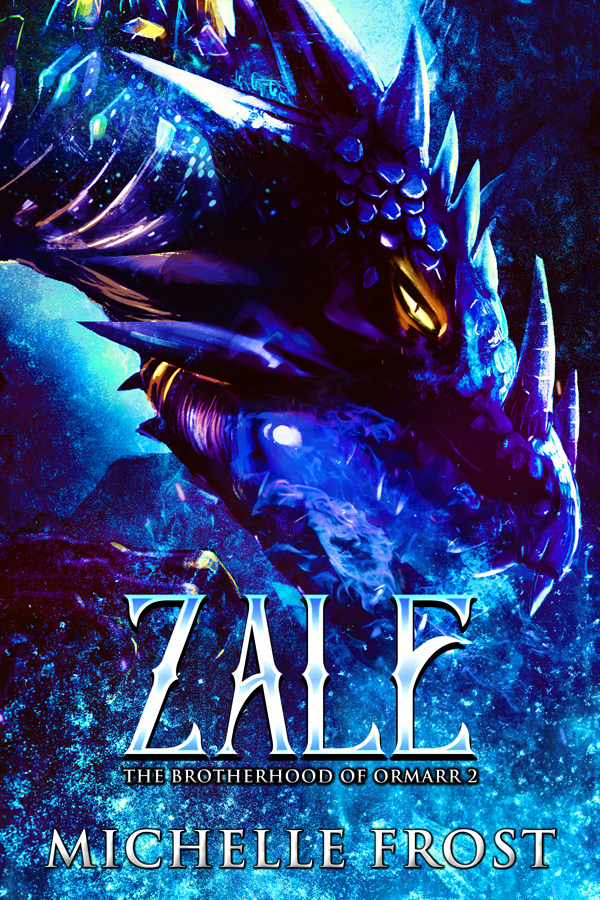 Series: The Brotherhood of Ormarr #2

Davis~
It was just another job—at least it was supposed to be—but snaring the feisty blue dragon I’d been contracted to collect and her rider in my trap changed everything. Hunting dragons was my job, and I was damn good at it. I’d never missed a target. Never failed to make a delivery. So why was every step toward turning over my bounty suddenly a struggle? No quarry had ever managed to get under my skin, but something in Zale’s haunting blue eyes called to me like nothing ever had before.

Zale~
When Itsaso and I were kidnapped, we fought like hell but found ourselves at the dragon hunter’s mercy. He locked my dragon away, leaving me to face captivity alone. Now, all I have to rely on is the training that’s been drilled into me every day for as long as I can remember and biding my time, waiting for Davis to make a mistake. Or my brothers to find and rescue us. But something happened the first time I truly looked in Davis’s eyes, dark pools as deep and enchanting as the sea, and I realized I was in so much more danger than I thought. How could a ruthless dragon hunter be my perfect mate? 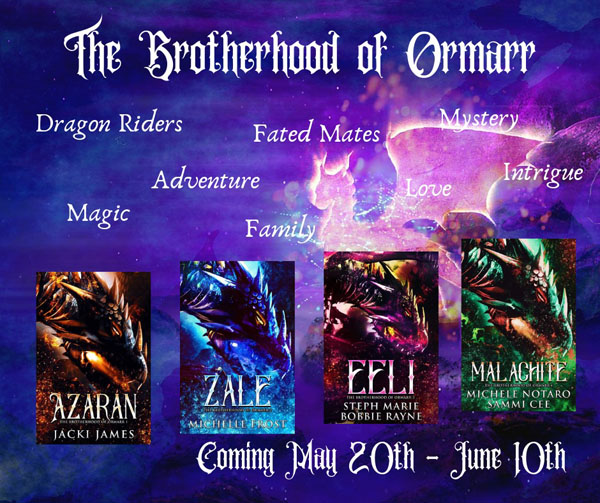 I moved down the beach, keeping my breathing even and my pace slow. Just as I reached the edge of the shadows I’d been lurking in, a joyful chuckle burst from Zale. The sound planted like a fist in my chest, gripping at my heart, and making my steps falter. What the fuck. From this vantage, I could only see his profile as he looked down at his dragon, love written into every line of his face. Emotions long since buried stirred inside me and a jealousy unlike anything I’d ever known soured my stomach. I missed that, that simple existence between two beings, that companionship, but even more confusing was that it wasn’t as if I wanted to push Zale out of the way and claim the dragon for myself... no, I wanted to sink down on the other side of him and wrap my arm around his shoulders. I wanted to be part of the bond they obviously already shared, and that didn’t make any fucking sense at all.

“D? You alright, man?” Nathair’s quiet voice in my earpiece ripped me out of my strange thoughts and back to the task at hand. I had a job to do and that was all that mattered.

With a deep breath, I kept walking, being sure to make enough noise to alert them they were no longer alone. I’d thought for a moment earlier that the dragon had sensed me with the way it seemed to stare into the darkness that was my shroud, directly at the place I’d been hiding, but it had gone back to lounging without so much of a flick of its tail. After just a moment, what I’d been waiting for happened as the air around the small beast shimmered until there was nothing but divots in the sand where it had previously been, and Zale climbed to his feet.

Stepping out of the shadows, I watched his eyes widen as he took me in. I wasn’t a small man—over six feet of hard fought muscle and scars. He turned fully toward me, the moon’s light revealing his face, and it was my own gasp that surprised me.

With his blond hair pulled back in a messy bun, all the soft angles of his face and the long lines of his neck were exposed. Creamy skin covered a lean, compactly muscled body, and I was having trouble pulling my eyes back up from the graceful arch of his bare feet in the sand.

“Are you lost?” he asked. His tone was friendly, but the suspicion was there.

“No,” I said with a shake of my head, more to get my thoughts back in order than anything else. “I heard there were some great tide pools on this beach.” As soon as the words left my mouth, I was reminded of my true purpose there, and the conviction of it rose in my breast. Reports said the man Zale had taken had come to town to look at the pools. Kidnapped and killed by this very man and the dragon resting in the breathtaking tattoo swirling around his left forearm as he’d attempted to shield a young boy. It was their justice I’d come to see done.

The chilling images of the fight that had led to two deaths flashed in my mind. Zale astride his blue beast of a dragon, leading a troop of dark wraiths, and then sending blue fire to end the life of an innocent man and the boy he’d been trying to protect. The whole nasty scene had been caught in our intelligence net from one of the satellites we regularly hacked into. With so few resources and the Brotherhood making moves all over the world, we were duty bound to do what we could, and I was there to bring Zale back to my Clan to face judgement, relieve him of the dragon he obviously didn’t deserve, and attempt to learn the identity of the person within the Brotherhood controlling the wraiths.

“Oh, well, I hope you enjoy them, then.” He walked toward the cliff, giving me a wide berth.

“Thanks.” I waited until he passed me, then spun, shooting across the sand to tackle him to the ground. His chest hit the sand with a thump, but he didn’t waste a second in trying to throw me off. Brute force wasn’t on his side, and I had it in spades, but as he shifted his hips, and slithered out of my grip, I knew exactly what Nathair had meant by wily. He threw an elbow, catching me in the cheek. My head snapped to the side and the taste of blood exploded in my mouth. I came up on my knees, letting him flip himself over only to grab his left arm and roll, shoulder first, until I was on my back perpendicular to him with his arm caught between my legs in an arm bar. I pressed on his throat with my calf, holding him down and cutting off his air as he struggled to break my hold. In a swift move, I lifted my leg off his throat and brought it down hard on his face. He grunted with the impact and I heard a crunch. He stilled for just a moment, stunned, but it was all I needed. I grabbed the sleeve out of my pocket and worked it over his hand. That was all it took and the magic worked into the woven material took over. It slithered up his arm, covering the dragon tattoo completely and binding itself to his skin, severing the connection to his dragon and keeping it trapped in its tattoo form.

As soon as Zale realized what I was doing, he thrashed wildly. “What did you do?” he screamed at me, wrenching himself from my hold and clamoring to his feet. I jumped to my feet as well, slinging sand and landing in a fighting stance. Bright red streaks ran down his mouth and chin from where I’d most likely broken his nose, but it was forgotten in his panic. “Saso!” He tore at the sleeve, trying without success to remove the material. Glittering, furious eyes lifted to me, and he charged. I pulled the taser gun from my back and fired, burying the prongs in his heaving chest and dropping him spasming to the sand. 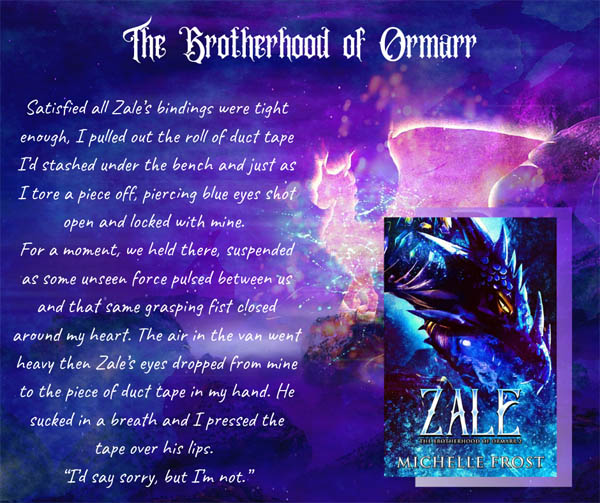 Stories have always been Michelle Frost's escape. Even as a kid, she can remember writing stories featuring her favorite cartoon characters. Now, her characters are a little more grown up, as are the stories she likes to tell. A self-proclaimed coffee addict and a bit of an introvert, she can most likely be found at any given time, on any given day with her hands on a keyboard or her nose in a book.

Michelle is giving away a $10 Amazon gift card with this tour—for a chance to win, enter via Rafflecopter: 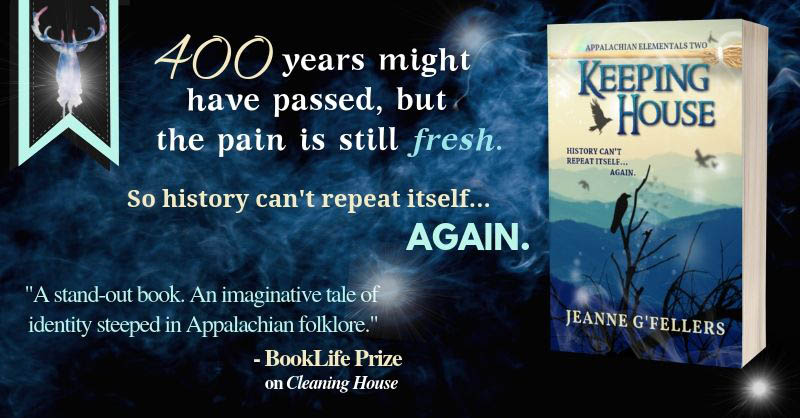