I feel like I've been out of the loop since On the Ice came out almost three weeks ago, but I've just been on vacation 🙂 While I was away I participated in some blog tour stops to celebrate the release of On the Ice. I still find it incredibly difficult to come up with unique blog posts for each stop, but I'm slowly learning about what people want to read about it.

Check out my blog tour stops below.

Day 1—I was over at Love Bytes Reviews talking about some of my inspiration behind writing On the Ice and why Alex was written as demisexual.

Day 2—I hung out at The Novel Approach and talked about the settings in On the Ice: Vermont, Florida, and Toronto.

Day 3—At Joyfully Jay I gave readers a little bit of background info on Mitch and Alex in the form of 10 Random Facts.

Day 4—At Bayou Book Junkie I gave a little peak into my writing process for On the Ice, complete with a picture of my plotting board! It's probably not that interesting to anybody but me, but whatever 🙂

Day 5—My fifth and final blog tour stop was over at MM Good Book Reviews where you can find a fun character interview with Mitch and Alex.

If you followed me on the tour, thank you! And I hope you had a chance to enter the Raffelcopter giveaway while it was still live.

About On the Ice:

For college sophomore Mitch Greyson, determination and persistence are the name of the game if he wants to make it as a professional hockey player. A busy schedule of practices, games, classes, homework, two part-time jobs—and now, working with a tutor to help him pass the class he’s failing so that he can keep his scholarship—shouldn’t leave him with enough time to flirt with the NHL player in town. But that doesn’t stop him.

Placed on the injured reserve list until his broken arm heals, NHL defenseman Alex Dean is using the time off to be with his ailing grandfather and get a head start on the book he’s been commissioned to write. He doesn’t expect to get roped into a tutoring gig, especially not for cocky, smart-ass Mitch.

But Alex soon discovers that there’s more to Mitch than meets the eye...and he really likes what he sees. Only Alex doesn’t dare risk his NHL career by coming out, and a relationship between them would jeopardize Mitch’s chances with the organization too.

It looks impossible. Then again, the best things usually do...

On the Ice is an m/m contemporary romance with a guaranteed HEA featuring a flirty college hockey player who meets his match in a demisexual NHL player. 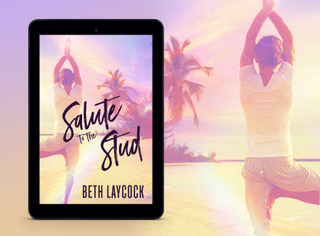 Release Blitz & Giveaway: Salute to the Stud by Beth Laycock