It's excerpt day! Read on for an excerpt from Mitch and Alex's first meeting. 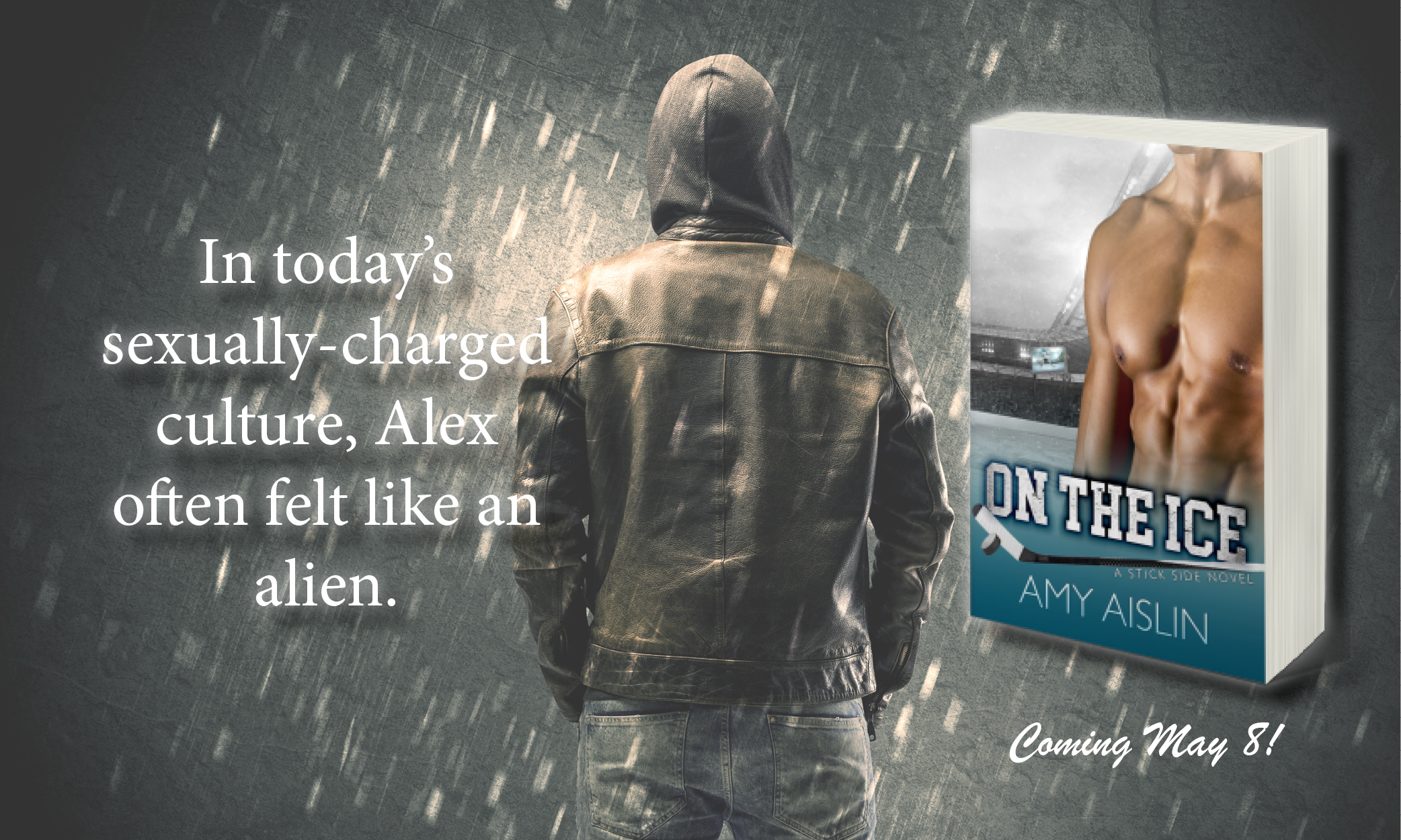 Pushing himself off the chair to stretch his legs, and ignoring the phone that had started buzzing in his pocket ten minutes ago, Alex Dean wasn’t surprised to find a tenacious Greyson standing on the other side of the table. What did surprise him was the tangle of nerves that knotted his belly when he got a better look at how attractive the other man was.

Greyson was lean and wiry and several inches shorter than Alex’s own six-feet-four, putting the top of his head level with Alex’s chin. His eyes were the color of chocolate, which matched his evening scruff and his messy, curly hair. Curls fell over his ears and his forehead. Alex wasn’t sure if he wanted to run his fingers through them or pull on a lock to see if it would spring back into its curly place. A backpack slumped off one shoulder, he had a notebook tucked under one arm, a smoothie in his hand, and an impish spark in his eyes.

The man was hot. He knew it too, if the way his smirk widened while Alex took his time checking him out was any indication. Attraction, however, meant nothing to Alex without emotions, so a person’s physical appearance didn’t usually elicit a response reminiscent of a teenage girl with a crush.

Nonetheless, he shook Greyson’s proffered hand. Greyson was twenty years old at most, and his flannel shirt didn’t suit him at all. He looked like a kid playing farmer in his older brother’s clothes.

“Mitch Greyson,” Greyson said, setting his notebook and smoothie on the table. His backpack thunked onto the floor at his feet. “Nice to meet you. Can I ask a follow-up question? Or five?”

Without waiting for Alex to answer, Mitch continued. “Can you elaborate on how the NHL is and isn’t what you expected?” He opened his notebook to a page with a list of questions that was way more than five. “I also had some questions for Chris Blair that you might be able to answer? What kind of hands-on experience do I need for a career in sport rehabilitation? Also, should I be getting involved in any kind of formal or informal research? Are there any courses that you know of that would help me get better prepared for a career in sport rehabilitation? If you were looking for an athletic therapist, what qualifications would you—?”

“Whoa, whoa,” Alex said, chuckling, holding his hands up to ward off more questions. “Hold it, hotshot. You’re asking the wrong person. Isn’t there anyone here you could interview, like Halley?”

“I’ve already talked to them all,” Mitch replied. “But they’re all academics now, or they work in fields I’m not interested in. I wanted to talk to someone specifically about sports science and rehabilitation.”

“You must’ve been disappointed when I showed up instead of Chris.”

“Do you think he’d talk to me?” Mitch asked, eager as a puppy. “We could set up a phone call. Or I could email him my questions. Do you have his card?”

“Let me talk to Chris,” Alex offered. “See if I can’t set something up between you.” It wasn’t an offer Alex would usually make, but he felt bad that Mitch hadn’t gotten to hear Chris speak when it was clearly something the kid had prepared for.

Mitch’s whole face—which was expressive to begin with—lit up. “Yeah? Let me give you my info.” He jotted his name, email, and phone number on a blank page of his notebook, ripped the page out, and slid it across the table to Alex.

“And, you know,” Mitch said, tapping the paper right above his phone number. “If you want to use this for something else too, I’d be okay with that.” Then he winked.

Wait. Was Alex being hit on?

He was mentally backtracking through their conversation when something must’ve caught Halley’s attention. He made his way over to them with clipped strides, his mouth in a tight line.

“Mr. Greyson,” he said. “You are not the only one wishing to speak with Mr. Dean.”

Mitch glanced around and his eyes went big at the line of students behind him waiting to talk to Alex. Alex bit back a sigh. His line was longer than the other panelists’. He sent a mental apology to his friends waiting for him at the pizza place in town, even as the phone in his pocket buzzed again.

“Should you wish for an autograph from Mr. Dean,” Halley continued, “the request needs to be made on your own time.”

“Autograph?” Mitch repeated. “Why would I want his autograph?”

Alex choked back a laugh. It was refreshing to talk to someone who didn’t give a shit about his pseudo-celebrity status.

“We were discussing career paths, actually,” Alex said, coming to Mitch’s defense. It was becoming clear that Halley had it in for Mitch for some reason.

“Don’t take up too much of Mr. Dean’s time please, Mr. Greyson.” Halley gestured at the cluster of students behind Mitch. “There are others waiting to speak with him.”

As Halley walked away, Mitch eyed the line over his shoulder before turning back to Alex.

“Bet they’re all wanting an autograph,” he muttered.

In line were three women—one of whom was holding a tiny mirror up to her face and applying lip gloss—a man wearing a blue and white Tampa Bay jersey, and another who was unashamedly filming Alex’s conversation with Mitch.

“You never answered my question,” Mitch said to him.

“Why the NHL is and isn’t what you expected.” Mitch tucked his pen into the notebook and slid both into his backpack.

“You follow hockey?” Alex leaned a hip against the table.

Alex tried to think of a response that wouldn’t sound wishy-washy, but also wouldn’t give anything too personal away. He didn’t know this guy from Adam. What if he was with the school newspaper and was angling for a sound-bite?

Except as he was wracking his brain for an appropriate answer, it hit Alex all at once that Mitch Greyson was blatantly checking him out. Okay, not so blatantly that someone not looking directly at his face and body language could tell, but blatantly enough that Alex—who never got hit on by men—finally clued in. He was, in fact, being hit on.

It completely threw him and whatever Mitch’s question had been? Yeah, it was gone. Not that Mitch seemed to care anymore whether or not Alex answered.

Was Alex giving off some kind of gay vibe or something? He’d promised himself a long time ago that if he ever made it to the NHL, he wouldn’t divulge his sexual preferences for anyone. He didn’t want to make a Thing out of it, wasn’t going to give the media something other than his skills to talk about. Not that he was worried—at twenty-four years old, he could count on one finger the number of times he’d been sexually attracted to someone. At this point, he was pretty sure the whole dating-romance-marriage-babies thing wasn’t in the cards for him. Not only did it take him forever to figure out if he was attracted to someone, but the way dating was going nowadays, nobody wanted to be friends first and wait for romantic feelings to develop, if they developed at all. There just wasn’t an app for that. Instead, people were too busy jumping into bed with random strangers and having casual friends-with-benefits hookups.

Hell, he didn’t even like kissing. He’d kissed all of two people in his life and it hadn’t done anything for him either time. It was wet and gross and unpleasant. The way things were going in his nonexistent love life, he’d be a virgin for the rest of his life. Others might bemoan their virgin status at twenty-four years old, but frankly, Alex didn’t care. What was the big deal about sex anyway?

In today’s sexually-charged culture, Alex often felt like an alien.

That didn’t, however, prevent him from acknowledging the attractiveness of another person. Like Mitch, for example. Alex’s extremely limited sexual experience was the reason the butterflies had come out when faced with such an outwardly beautiful person.

Mitch’s gaze swept him up and down, a half smirk on his face, his thumbs tucked into the waistband of his jeans and drawing attention to his crotch. The man really was attractive in an I-know-I’m-the-shit kind of way. It was the kind of personality type Alex usually avoided. It was disingenuous and he didn’t have time for fake people in his life. Alex’s bullshit meter clanged and any butterflies that’d appeared at Mitch’s good looks disappeared in the face of Mitch’s in-your-face personality.

Mitch’s gaze landed on Alex’s mouth for one, two, three seconds. Then he took his time cataloguing Alex’s face. When Mitch’s eyes met his again, the man’s smile turned lewd.

It was possible Mitch was the type of person who hit on anything that moved.

Eyes hooded, he leaned in across the table and whispered, “Maybe I’ll see you around sometime.”

Well, it was blatantly obvious what that meant.

With one last parting glance at Alex’s mouth, Mitch turned and left.

Release Blitz & Giveaway: Once Upon a Rainbow, Volume 3